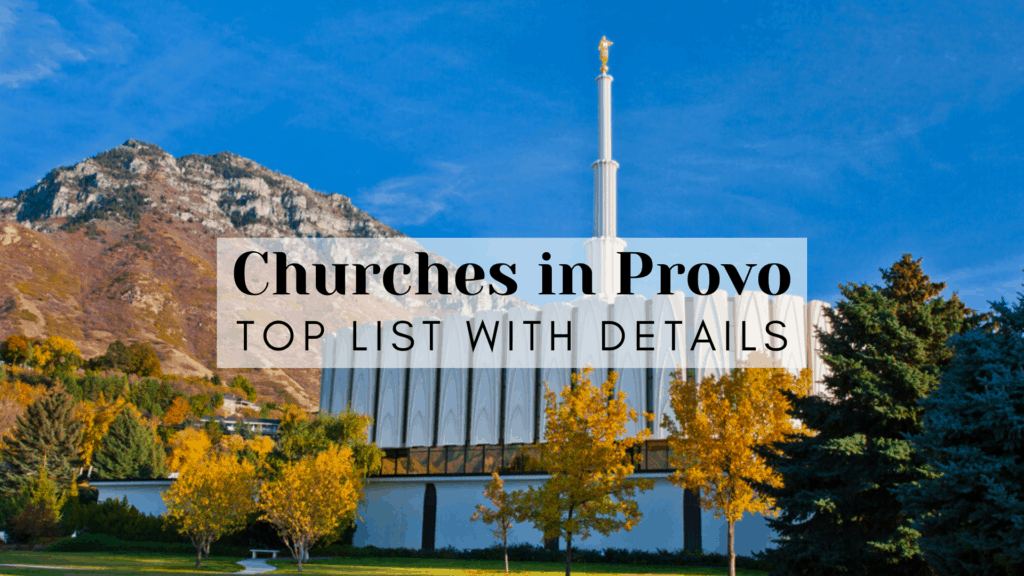 In a city developed on the fundamentals of Christian values, churches in Provo offer a wide variety of options for people of all faiths, denominations, and beliefs.

Take a look at this incredible list of options for those trying to find a new place of worship. No matter your religious affiliation, you’re sure to find the best church in Provo that fits exactly what you’re searching for.

1. The Church of Jesus Christ of Latter-day Saints

Although The Church of Jesus Christ of Latter-day Saints is a worldwide church with over 16.3 million members spread across hundreds of countries, its most substantial following can be found in cities across Utah. Home to more than 108,000 members within numerous congregations, it is the largest among Christian churches in Provo, UT. The foundation of their beliefs is in God the Father, Jesus Christ, and the Holy Ghost. 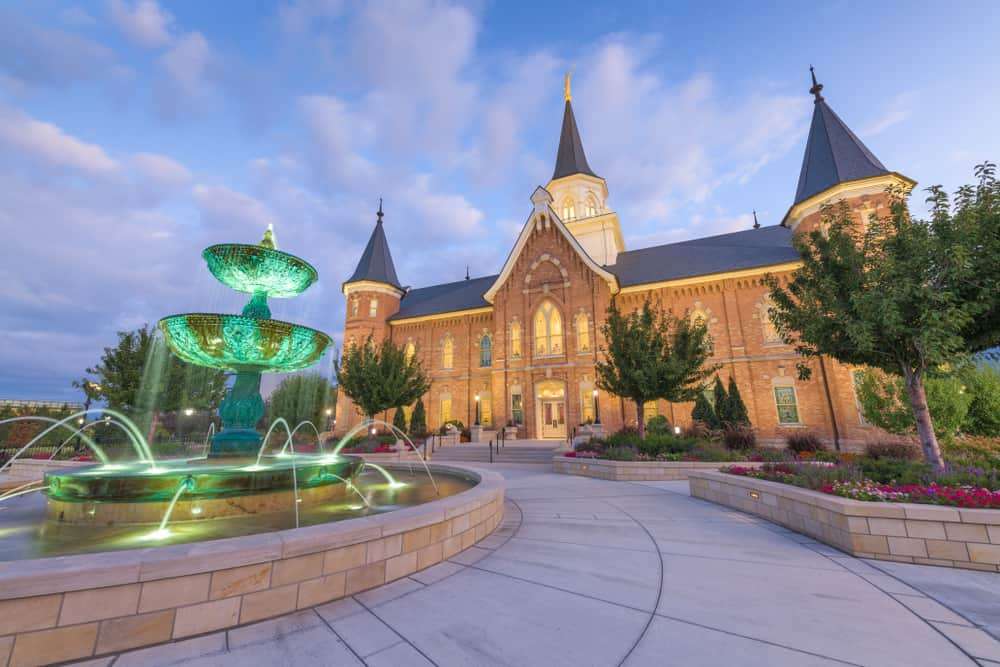 It’s a family-friendly church in Provo with many programs available for children of all ages. With church buildings scattered all over town, the two most prominent you’ll see on the horizon are the Provo Utah Temple and the Provo City Center Temple (pictured above). While some may refer to this religion as the “Mormon Church” due to their belief in The Book of Mormon along with the Bible, the true name stands as The Church of Jesus Christ of Latter-day Saints.

Known for its bright red door and stained glass windows, St. Mary’s Episcopal Church is led by Reverend Susan Toone who serves as the church’s Vicar. As with traditional Episcopalian values, St. Mary’s believes and follows the Apostles Creed and the Nicene Creed. Built upon their love for Jesus Christ, they provide a safe place as one of the most popular churches in Provo for those who wish to worship with them.

Offering Sunday school activities for children, they can learn from the scriptures while also gaining knowledge of the church’s history. They’ll have opportunities for fun projects that occasionally include arts, crafts, and more. All members of this Provo church are invited to follow the scriptures, Episcopal traditions, and reason.

Led by Pastor David D. Stolarski, the Provo Bible Church centers around core beliefs of sovereignty, transformation, sufficiency, and dependence on God. They teach the need for salvation through Jesus Christ and changing their hearts based on his example. Now one of the largest Baptist churches in Provo, they’ve been around since the year 2012. 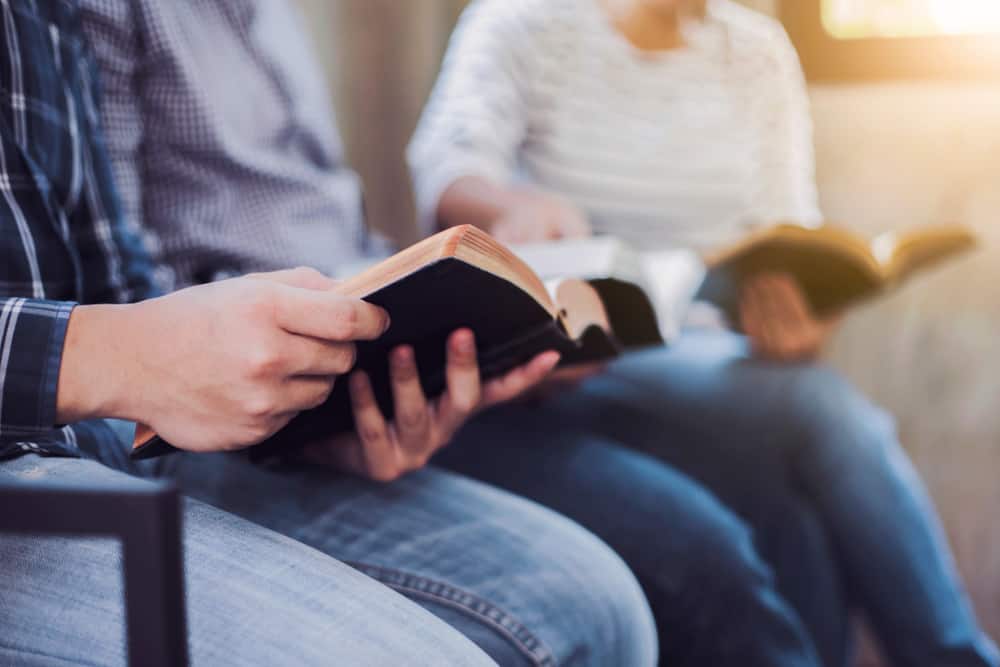 Their worship services focus on music and family ministries. From a biblical perspective, they preach the requirement of finding true character but that God’s grace is sufficient for all to be saved. Among Provo churches, they frequently encourage the importance of growth both in and out of their services.

Right across the street from St. Mary’s is the Provo Community Congregational United Church of Christ, a non-denominational group. Currently under the direction of Reverend J. Keith Cupples, their founders began as a group of like-minded people who started the church in February 1891. These eleven individuals agreed on their beliefs and creeds deciding the best way to share them was with their own religious establishment.

Placing a major emphasis on community growth and faith, their core beliefs center around a triune God. As one of the top Christian Provo churches, they constantly stress the need to develop a relationship with Him while also being a servant to others. They also believe in the need to partake in the communion and being baptized for their salvation.

The First Baptist Church of Provo has been around for a while but is presently under the instruction of their Pastor of Preaching & Vision, Russ Robinson, who was called to the role in 2009. A couple of years later in 2011, James Thompson was then called to serve along Pastor Robinson’s side as the Pastor of Education.

With core values focused on the Bible, the Trinity, and democratic-style governance within the church, this Provo church for Baptists has seen decent growth year after year. Worship services generally include everything from music and creeds to scripture reading and preaching.

6. Calvary City on a Hill in Provo

Pastor Rudy is the current instructor at the Calvary City on a Hill in Provo. Their website has online sermons dating back to 2013 though their beliefs and history go back much further than that. Among the top non-denominational churches in Provo, the beliefs at City on a Hill include specifics that surround the Bible, one God, prayer, baptism, the second coming of Christ, and the resurrection of all.

Along with their religious services, they also offer numerous outreach programs that teach financial skills, serve the community, and manage a food pantry that is constantly restocked.

Justin Banks has had a role as an associate pastor at other churches since 2004, but eventually made his home as the Lead Pastor at the local Genesis Project campus. At Genesis Project Provo, they offer upbeat religious worship with everything from music and praising to beach balls bouncing around in the crowd.

Due to its popularity among Provo churches for Christians, they’ve seen tremendous growth from referrals and walk-in visitors. You’ll find non-denominational core beliefs that focus on the Bible, One God, Jesus Christ as God the Son, and the urgency of Baptism.

The Mennonite belief system began more than four centuries ago and has spread to all corners of the world. As the religion was first getting started, followers were commonly called Mennonites or Anabaptists due to their refusal to baptize infants as with some other religions. 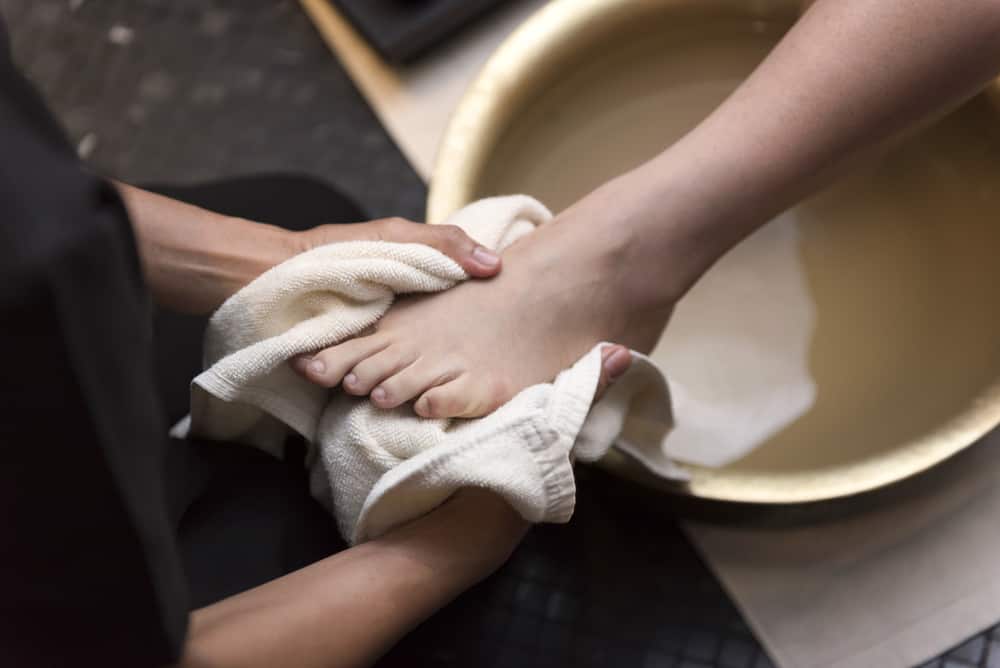 As one of the only churches in Provo with this belief system, the Living Water Mennonite Church & Christian Ministry of Provo follows the same concepts as closely as they can. They believe in the Trinity, the Apostles Creed, as well as the ordinances of head-veiling, foot-washing, communion, and baptism, which they believe are essential to salvation.

Which of these Provo Churches Sounds Right for You?

Regardless of your beliefs, there are great churches in Provo that will fit your specific desires and lifestyle. In a highly religious city, you’ll find great people and many communities who are ready and willing to accept you with open arms.

If you’re searching for top Provo churches because you’re moving to the area, the team at Wasatch Moving Company is here to serve you! Call today at (801) 770-0765 or complete the Request a Quote form above!