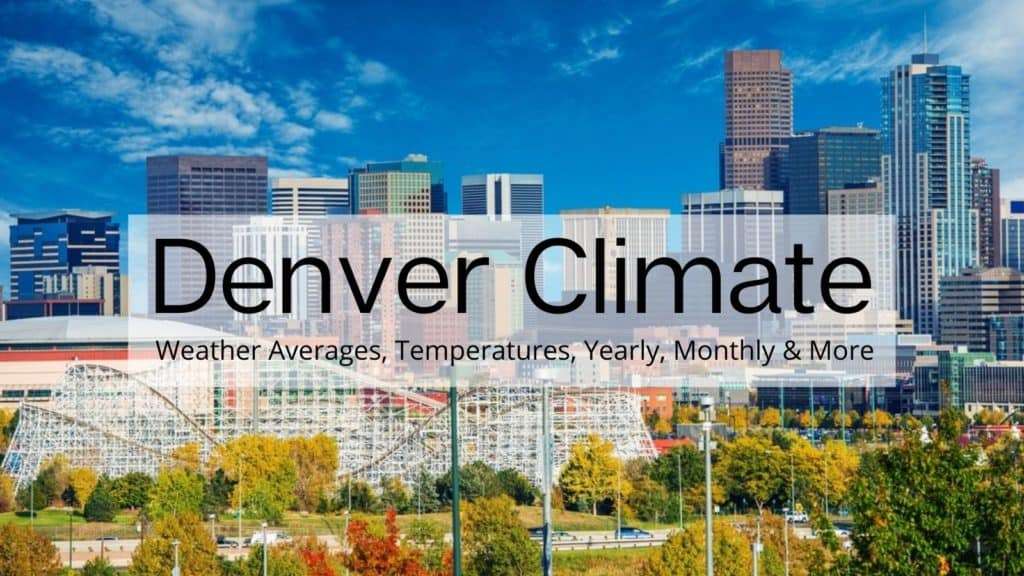 The city of Denver, CO has a semi-arid, continental climate and is home to a population of about 663,303 people. Located along the eastern side of the Rocky Mountains, Denver sits at 5,280 feet above sea level.

Compared to similar cities, Denver has relatively low humidity and experiences a significant amount of sunny days per year. But Denver also gets a good amount of snow that is higher than the national average.

This snowfall makes Denver a popular destination for skiing, snowboarding, and other fun winter activities. Residents and visitors make their way to top-rated ski resorts such as Arapahoe Basin and Winter Park.

The weather in a specified area like Denver, CO includes details about current conditions including temperature, humidity, precipitation, and other information. On the other hand, a city’s climate covers the type of weather the area generally experiences over a longer period of time including seasons, extreme weather, and more.

Known as the “Mile High City”, the Denver climate varies greatly from its hottest time of year to its coldest because of diurnal temperature variation. The city has freezing winters and hot, dry summers to give residents the feel of every season.

Spring in Denver starts in March and gradually leads into the time of year when new plants, flowers, and trees will be able to start growing again. Denver spring temperatures start with lows around 29°F during March and then get to highs in the mid-70s come May. Before everything thaws out, there is still an average of about 7.2 inches of snow in March and 5.1 inches in April. 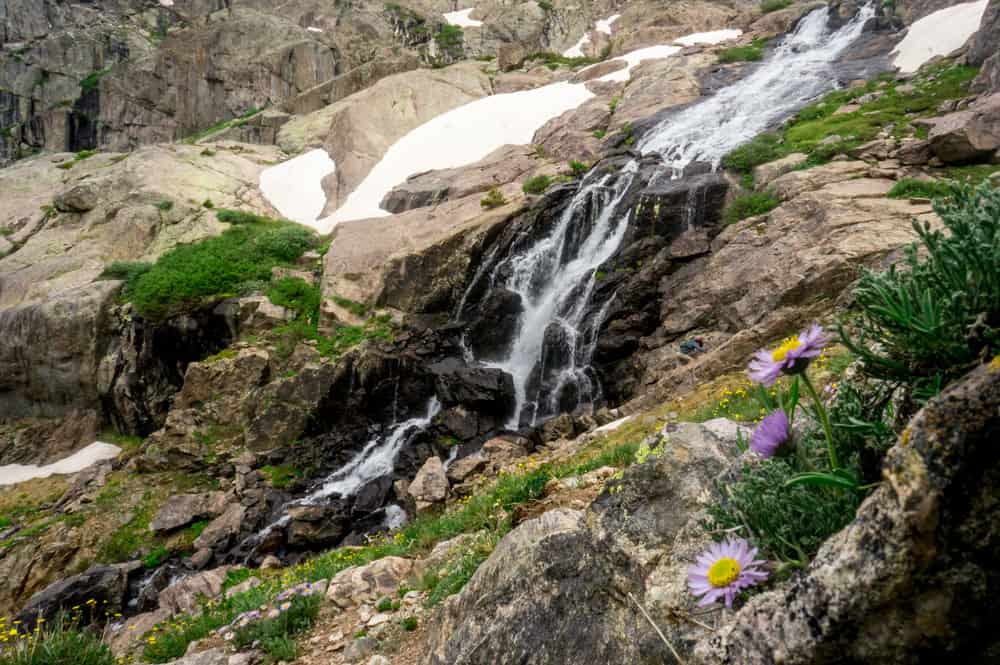 The frozen snow eventually turns to rain, adding up to a total of about 5.53 inches of rainfall total within these three months. May brings the largest portion of that, accounting for about 2.32 inches on average.

The thermometer rises fairly quickly as summer in Denver starts in June. Temperatures reach average highs between 86°F and 92°F during these three months with the highest temperatures of the year in July. Lows keep nights cool and comfortable varying from about 55°F to 61°F on average.

The average rainfall in Denver during the summer is similar to the spring, totaling about 5.54 inches. July sees the most precipitation at this time of year, making up about 2.16 inches of that amount.

Low temperatures reach the mid-20s during Denver fall weather and also start the annual snowfall. While there isn’t typically any snow in September, the winter climate in Denver does get about 3.4 inches of snow in October and around 5 inches of snow in November.

Looking to the coldest part of the year, winter in Denver starts in December and proceeds through February. Freezing Denver winter temperatures drop into the teens at nighttime and hover around the mid to upper 40s during the day. But there are also brief periods during winter in Denver where temperatures warm up slightly due to Chinook winds. 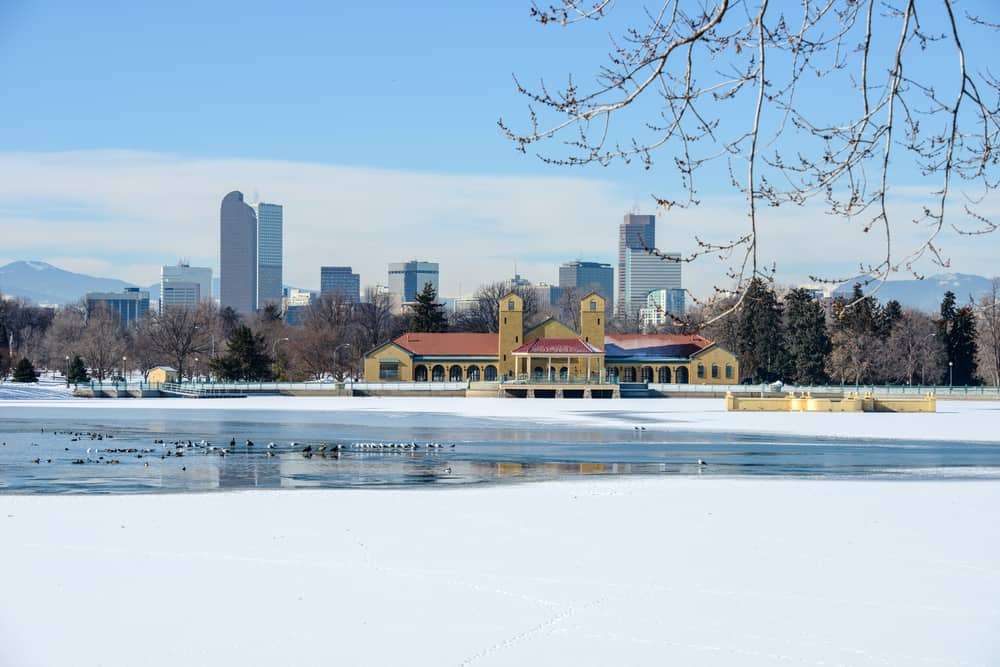 The largest annual snowfall in Denver comes during February, adding up to about 10.9 inches on average. December gets about 6.1 inches of snow on average, while January brings an average of about 5.7 inches. These are the ideal parts of the year when Denver residents pack up their snow gear and make their way to one of the area’s many ski resorts.

January is freezing in Denver with temperatures between 20°F and 49°F and an average snowfall of 5.7 inches on average.

Denver remains chilly in February as average temps range from 21°F to 49°F. It also gets 10.9 inches of snow on average, the most out of the annual total. Time for skiing!

Temperatures in March vary between lows around 29°F and average highs of 58°F with less snow than January and February.

The climate in Denver doesn’t change much from March to April. Average temperatures only rise slightly to between 35°F and 65°F.

May weather in Denver is known for having the highest volume of rain (2.32 inches), making it the wettest month and an important time to have a raincoat handy. Temperatures go up to averages between 45°F to about 73°F.

Bringing with it one of the biggest temperature spikes during the year, June in Denver warms up as it reaches an average high of 86°F and an average low of 55°F.

July is the hottest month in Denver as temps finally start to get into the 90s, giving residents a chance to hit the pool and other summer activities. Night temperatures will stay around 61°F but daytime brings highs averaging 92°F.

Though not quite as hot as July on average, August has the most days of sunshine and is still warm with temperatures between 59°F and 90°F.

One of the most popular months in Denver is September as things only slightly cool off to put average temperatures in a comfortable range of 50°F to 82°F.

Offering the most significant drop in temperatures during the year paired with a small amount of snow, October cools down to averages between  37°F and 68°F.

Denver snow starts to increase during November with about 5 inches of snowfall on average. Temperatures in November are between 27°F and 57°F on average.

As the year nears its end, December is the coldest month in Denver and has an average of 6.1 inches of snow. Frigid temperatures at night reach averages in the mid-teens while daytime highs average around 47°F.

Freezing cold months can reach temperatures below 0°F and can be paired with blizzards and snowstorms. While the most common concern for extreme weather in Denver comes during the winter, it’s not the only one residents and visitors should be mindful of. 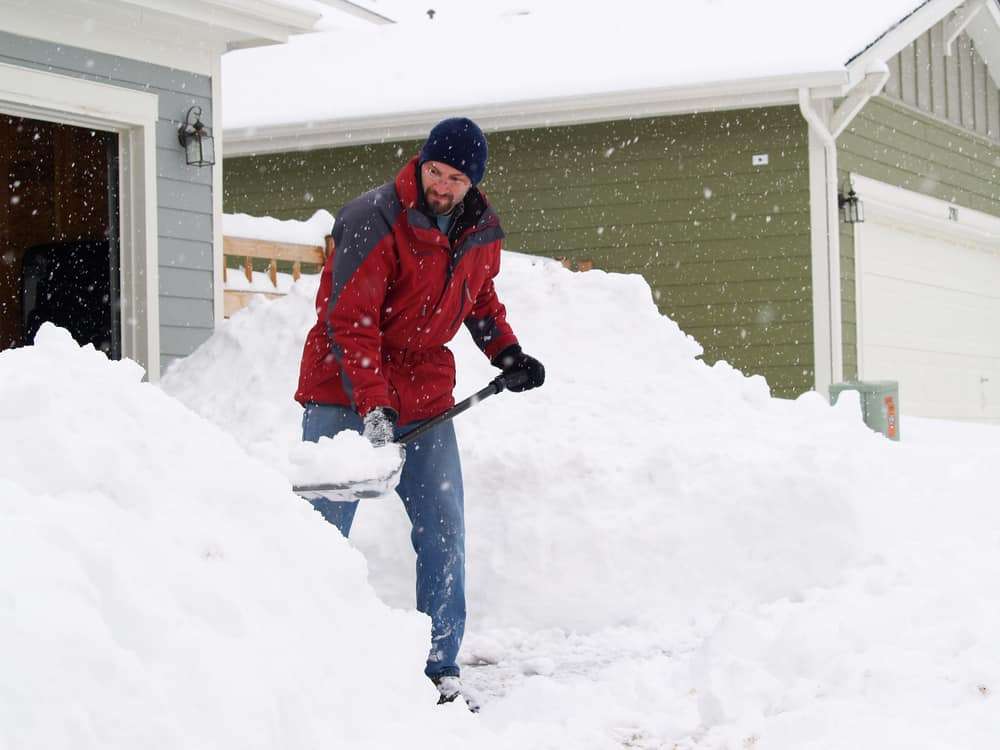 The climate in Denver also has issues with thunderstorms, wildfires, and tornadoes. Fires can be sparked during dry months as temperatures rise while rainy days can bring heavy lightning with them on occasion. In some cases, hailstorms have been reported during the summertime as well.

Whether you’re living in Denver or simply planning a visit, there are both good and bad times to be in this city. Spring in Denver is a great time to visit as late April and early May tend to offer comfortable temperatures and cool weather.

If you want to avoid the hottest time of the year, September and October provide the best Denver climate as the summer turns into fall. Temperatures cool off but don’t have the heavy snow that will follow over the next few months. 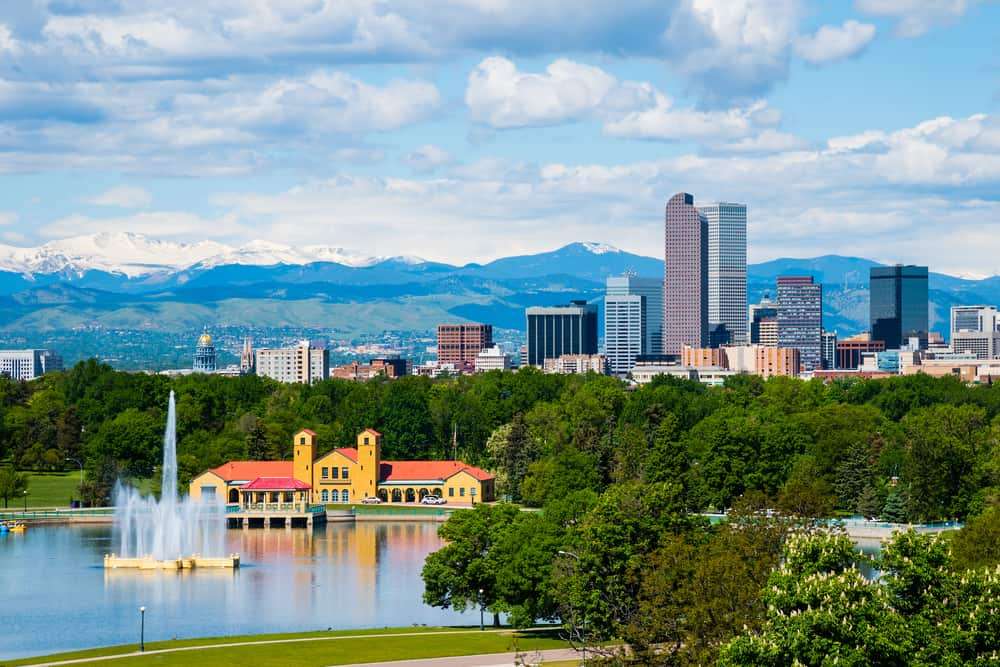 Although summer in Denver is hot, it is still one of the most common times of the year for tourists to visit the city. If you don’t want to be left fighting for hotel rooms and parking spots, this may not be the best season to visit.

But easily the least popular time of year to visit is during the winter months. The Denver climate shifts dramatically as temperatures drop and piles of snow seem to fall from the sky. Unless you’re planning on skiing, snowboarding, or other snow activities, you may want to consider a different season to head to Denver.

Learning About the Denver Climate Before a Relocation?

Many people want to know more about the climate in Denver before they transition to the city. If you’re moving to Denver, we have a top-rated team of movers ready to help you! Give Wasatch Moving Company a call today at (720) 798-2878 or complete the Request a Quote form above for a free moving estimate!