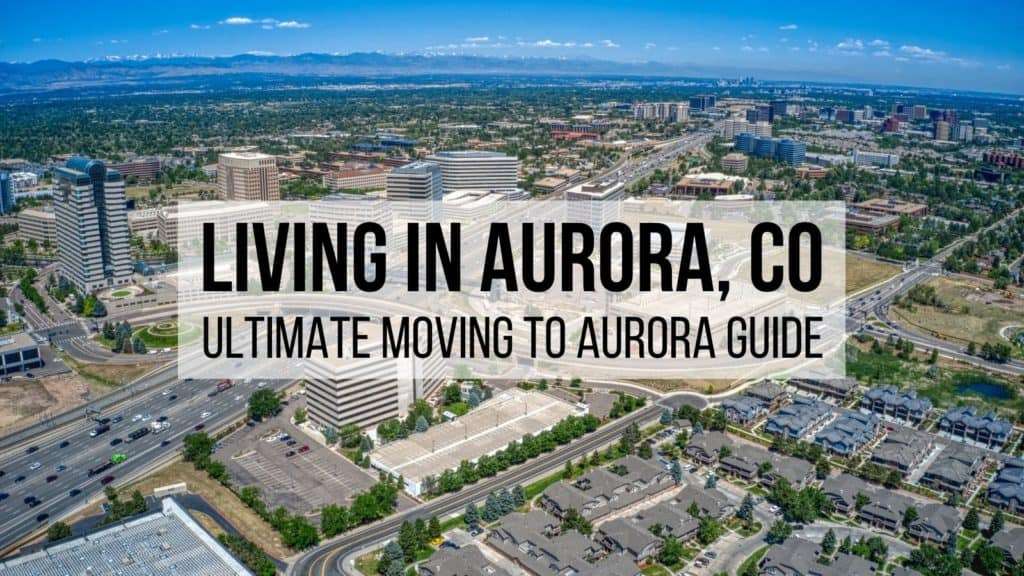 Is Living in Aurora, CO Right for You? | 🏡 ULTIMATE Moving to Aurora Guide

The wonderful city of Aurora, CO is a nice place to live located about 9.5 miles east of downtown Denver. Aurora is bordered by Centennial, Denver, Greenwood Village, Foxfield, and Parker.

Originally inhabited by Cheyenne, Ute, Sioux, and Arapaho tribes, the land was purchased by settlers in the 1880s. At that time, the area was named Fletcher after one of its original founders, businessman  Donald Fletcher. It was quickly established as a residential community with big dreams of becoming as big of a city as Denver.

In the early 1900s, Lowry Air Force Base was built, bringing a large military presence to the area. The base was later closed in 1994, being converted into a large master-planned community since then. In 2008, the city of Aurora was named as an All-America City by the National Civic League.

Because of its location, Aurora is often called by the nickname “Gateway to the Rockies”.

Aurora is known for being the third-largest city in Colorado as well as for its fun culture, relaxed atmosphere, great places to eat, variety of shopping destinations, and numerous outdoor activities.

How many people live in Aurora? As newcomers continue moving to Aurora, the city has been on a steady incline since the 1960s when only about 48,500 people lived there. The Aurora population is 379,312 with a median age of 34 years old.

About 46% of the population in Aurora is married with an average of about 2.8 people per household. The median household income in Aurora is $69,235.

The city of Aurora covers a large area of 154.3 square miles and is split between three counties: Arapahoe County, Adams County, and Douglas County.

Where should I live in Aurora? As one of the top cities in the state of Colorado, a few of the best Aurora neighborhoods are:

As one of the safest neighborhoods in Aurora Hills, this community is next to nice amenities like Highline Park and the Aurora Hills Golf Course.

Listed with the most affluent neighborhoods communities in Aurora, Saddle Rock has its own golf course and is located right around the corner from the popular Southlands shopping center.

Located right next to the Cherry Creek Reservoir, Meadow Hills is one of the best neighborhoods in Aurora for easy access to outdoor activities.

3. Cost of Living in Aurora, CO

The average cost of living in Aurora is 17% higher than the national average but is also about 4% lower than the Colorado state average. Most people living in Aurora pay less than in other parts of the state for things like groceries, healthcare, utilities, and even the Aurora real estate market.

How much does it cost to live in Aurora, CO? Per recent statistics from Numbeo, these are some of the average amounts you can expect to pay for certain expenses.

As the 28th safest city in Colorado, the area has a positive record that gives newcomers moving to Aurora peace of mind. While it is one of the safer cities in the state, the crime rate in Aurora is about 47% higher than the national average. Statistics show that there are about 728.49 crimes per 100,000 people residing in Aurora.

Crime in Aurora has been steadily decreasing at an average rate of about 2% per year. Compared to many other cities in Colorado, Aurora is a safe place to live.

You can also do a search through an Aurora crime map to see if the community you’re looking at has a history of being safe.

There is a semi-arid climate in Aurora with mildly warm summers and freezing, wet winters. Local Aurora weather brings lots of snow during the colder months but also offers plenty of months to thaw out. 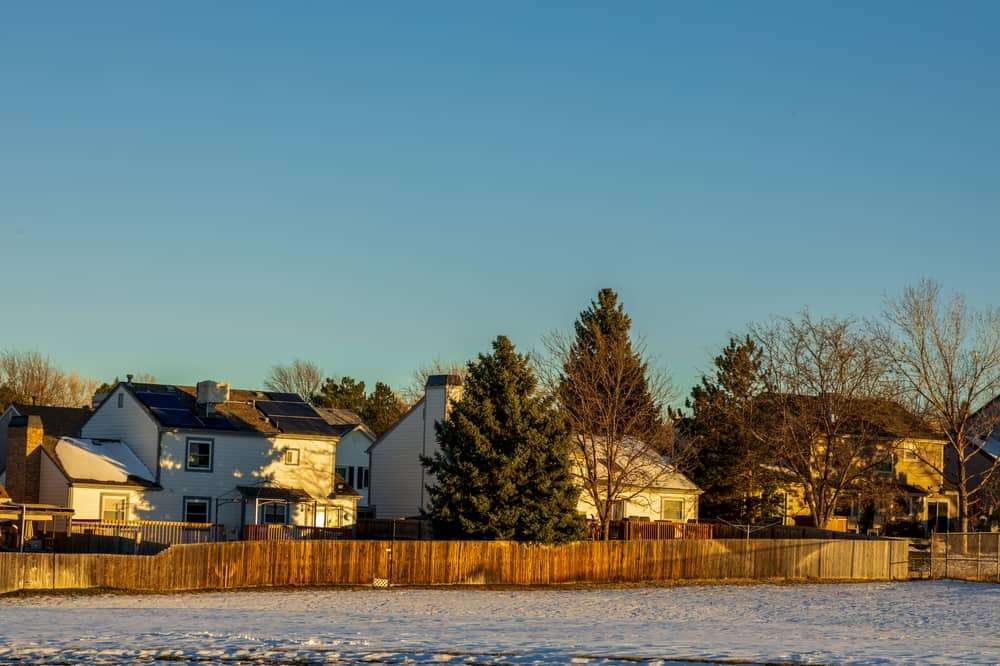 The average temperature in Aurora during winter is between the mid-teens at nighttime and the mid-40s during the day. Summers warm up to comfortable temperatures ranging from the upper 50s at night to the upper 80s at the hottest part of the day. Aurora weather brings an average of 17 inches of rain and about 62 inches of snow per year.

6. Things to Do in Aurora

There is a huge range of great things to do, fun outdoor activities, neat points of interest, and cool places to visit in Aurora.

A post shared by Town Center at Aurora (@tcaurora)

7. Places to Eat in Aurora

The homeownership rate in Aurora is 59.7%, meaning barely over half of the city’s residents have purchased their living arrangements. While the Aurora real estate market is competitive, the pricing is reasonable. Homes tend to only stay on the market for an average of 7 days, getting multiple offers within that short time frame. Many hot locations in nice areas around Aurora tend to sell for an average of 4% above list price. 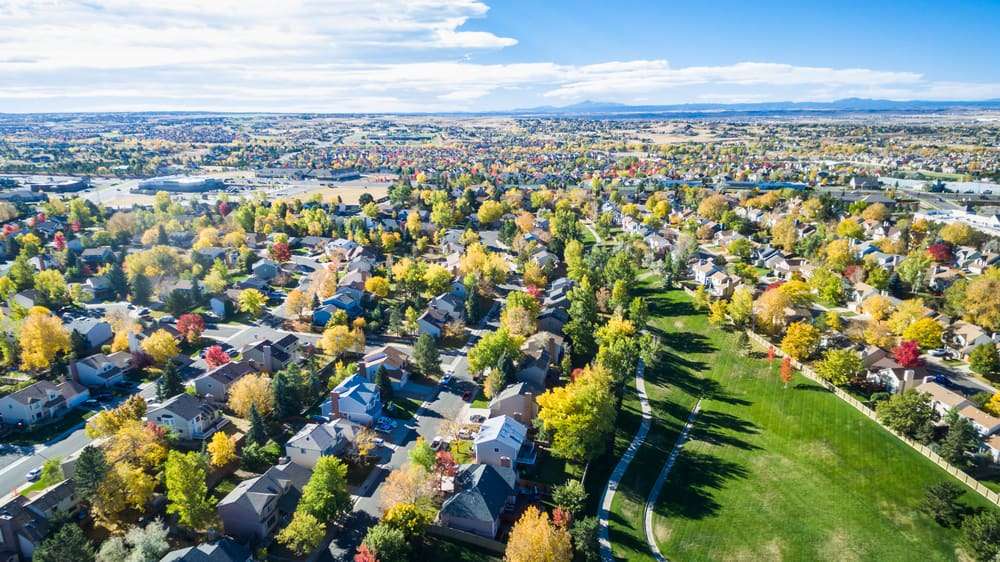 About 40.3% of the residents living in Aurora rent their homes and apartments, opening up many great opportunities to lease a nice place to live. The average price of rent in Aurora is $1,364 per month, which has increased by about 1% in the last year.

There are about 102,414 kids between the ages of 0 and 18 years old living in Aurora, significantly making up about 27% of the city population. The great schools in Aurora make it an excellent place for families to live.

New students relocating to Aurora will be served by either the Adams-Arapahoe 28j School District or the Cherry Creek 5 School District. A few of the highest-ranked Aurora schools are

The average salary in Aurora is $67,000 per year with an average hourly rate of $17.81 per hour. There is a flat Colorado state income tax rate of 4.63%, which remains the same regardless of your income or filing status. The Aurora unemployment rate is currently around 7%.

Local workers have Aurora jobs in industries like healthcare, education, government, utilities, retail, and more. Some of the best places to work in Aurora include:

A large number of residents in the city also commute from Aurora to Denver for work, which covers about 9 miles and takes 30 minutes depending on traffic.

If you are searching for a job in Aurora, check out available careers on Indeed.

Trying to figure out how to get around Aurora? There are a handful of helpful Aurora transportation services to help you make your way around the city.

While the area’s communities are fairly walkable, most households in Aurora have an average of 2 cars. The average commute in Aurora is about 28.5 minutes.

If you plan on using public transportation in Aurora, you can rely on the reputable solutions provided by the Regional Transportation District (RTD). They provide bus routes, access to a light rail, and multiple trains for use when traveling locally. Aurora transit services are easy to navigate and aren’t overly expensive.

Residents living in Aurora also have access to rideshare services like Lyft and Uber. Lyft also offers access to electric scooters that travel 15 mph, giving you another convenient way to get around Aurora.

If you plan on taking a flight out of Aurora, you’ll most likely depart from the Denver International Airport.

Although Aurora doesn’t have its own professional sports teams, the close proximity to Denver makes it easy to cheer on all of their local athletes.

Have you found enough reasons to move to Aurora? If you need a moving company that can help you with the relocation, count on our expert Aurora movers! Reach out to Wasatch Moving Company today by calling (720) 798-2878 or filling out the Request a Quote form on this page for a free moving estimate!