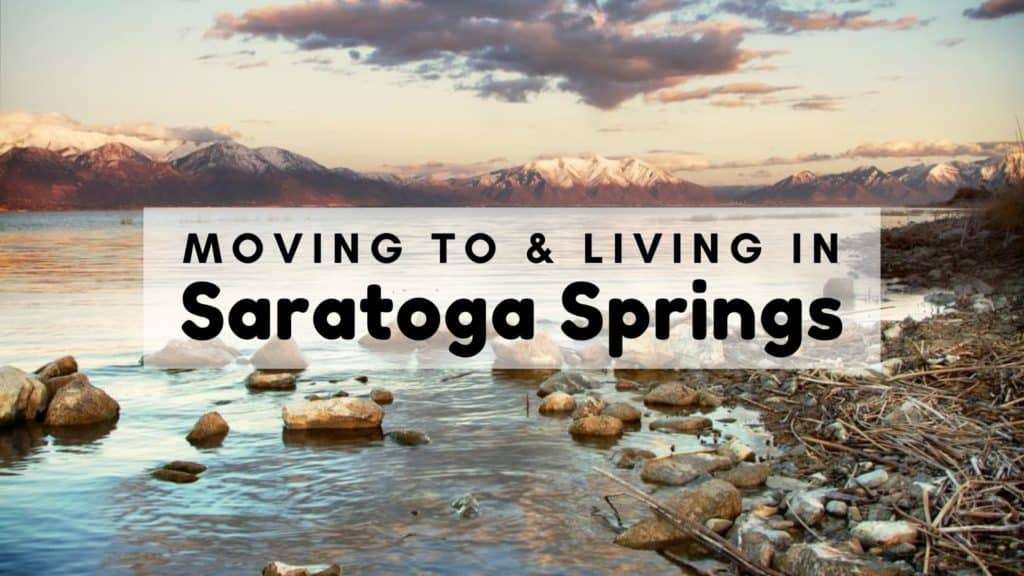 The pleasant city of Saratoga Springs, UT is located about 24 miles northwest of Provo on the other side of Utah Lake. It can be found next to Eagle Mountain, Lehi, and the Lake Mountains.

Especially known for its incredible hot springs, Saratoga Springs rests along the edge of Utah Lake. These pools average about 109 degrees at the source with smaller, cooler pools in various areas. Both visitors and locals living in Saratoga Springs love simply lounging around and hanging out in this fun area.

Anyone thinking about moving to Saratoga Springs will want to know key details about the city so they can determine whether they can afford to live here as well as the amenities the area offers.

Between 2000 and 2010, the city of Saratoga Springs has the fastest growth rate in the state of Utah at a staggering 1,672.8%. That growth has continued even further as the city has skyrocketed from only 18,060 residents in 2010 to the current Saratoga Spring population of 37,751. And with a shockingly low median age of 22 years old, this area is perfect for young parents with growing families.

Saratoga Springs demographics are made up of a population of 89% Caucasian, 5% Hispanic or Latino, 1% Asian, 1% Black or African American, and 1% Pacific Islander.

The gender ratio leads slightly in men’s favor with about 52.3% male and the other 47.7% female.

2. Best Things to Do in Saratoga Springs

Saratoga Springs is a city packed with more than 20 parks, providing plenty of places to visit and things to do around town. By far the most popular park in the area is Neptune Park, where visitors can enjoy 10 acres of open space, a massive playground, basketball courts, picnic tables, and more. Enjoy a nice picnic on a clear day or let your kids come and play on the park’s huge climbing pyramid.

Another one of the top things to do in Saratoga Springs is to visit the area’s namesake: the hot springs. The Saratoga Hot Springs gives visitors the chance to soak in warm, natural pools that reach temperatures over 100°F. It’s easily accessible and also offers fun bird watching, spectacular sunsets, and amazing photo opportunities.

Before relocating to Saratoga Springs, you’ll also want to know where you can find the top places to eat. For over 20 years, Beto’s Mexican Food has stood as one of the best Saratoga Springs restaurants around. Their menu has a delicious spread of burritos, tortas, enchiladas, and chimichangas, as well as a wide variety of fish tacos, carne asada tacos, and chicken tacos.

Another one of the most popular places to eat is Chubby’s Cafe, where you’ll find a great selection of scrumptious things to eat. A look at their menu will point you to mouthwatering burgers, chicken sandwiches, shrimp baskets, chicken wings, signature sides, and so much more.

Thanks to more expensive costs for expenses like healthcare, housing, and transportation, the cost of living in Saratoga Springs 23.5% higher than the U.S. average. It is also about 10% higher than the Utah average overall as well. Typically, the only things with costs that are below average include cheaper prices for groceries and utilities.

With 82% of people residing in Saratoga Springs owning their own homes and living spaces, the housing market in this area is very strong. The average price of a home in Saratoga Springs is currently around $409,000, which generally requires a 7.1% down payment. Most of the Saratoga Springs, UT homes for sale spend about 19 days on the market and include everything from condos for around $250,000 up to large, extravagant homes around $1 million and more.

On the other hand, if you’re moving to Saratoga Springs with the intention of renting, you’ll find there are still a handful of great options for you as well. The average price of rent in Saratoga Springs is about $1,312 per month, which is an 8.23% increase from last year.

As the 5th safest city in Utah, people living in Saratoga Springs communities experience peace of mind and comfort as they go through their daily lives. The city spans a decently sized area of about 23 square miles, providing plenty of room for the area to continue growing. 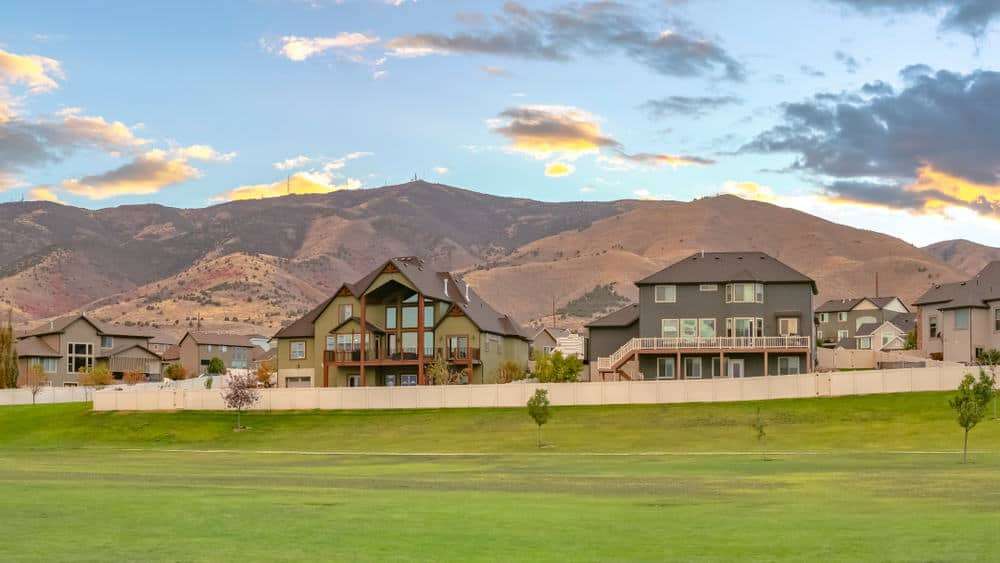 A few of the best and safest neighborhoods in Saratoga Springs include:

Saratoga Springs is located in the north central part of Utah County, covering the zip codes of 84005, 84043, and 84045. If you choose to get a new phone number after moving to Saratoga Springs, you can expect it will have a standard 801 area code.

Due to its location, Saratoga Springs has limited options as far as local transportation goes. Because of this, most people residing in Saratoga Springs have their own vehicles. The nearest freeway is the I-15, which is about 10 miles to the northwest.

Wondering if Saratoga Springs has convenient shopping nearby? Locals enjoy a variety of places where they can shop and get their groceries such as Walgreens, Costco, Porter’s Crossing Town Center, Smith’s Marketplace, Walmart, and Dollar Tree.

Making up a staggering one-third of the local population, there are 8,416 children between the ages of 5 and 17 residing in Saratoga Springs. These kids attend educational programs within the local Alpine School District, which has a handful of reputable places of learning.

A few of the top-rated schools in Saratoga Springs are:

There are no colleges in Saratoga Springs and the closest secondary schools are at least 20 miles away in cities like Orem and Provo.

While the city is mostly residential, locals still have access to a wide range of Saratoga Springs jobs. With a median household income of $80,857 in Saratoga Springs, the most common careers can be found in sales, management, administrative support, finance, and computer professions. These options are spread across local industries like retail, technical services, education, healthcare, manufacturing, construction, and insurance.

The largest employers that offer local jobs in Saratoga Springs include:

A handful of people relocating to this area may also choose to commute from Saratoga Springs to Orem as well as to Provo for their jobs.

With so many great outdoor activities like parks and the hot springs close by, residents living in Saratoga enjoy beautiful weather for most of the year. The area gets about 15 inches of rain during the year, along with about 33 inches of snow each winter. 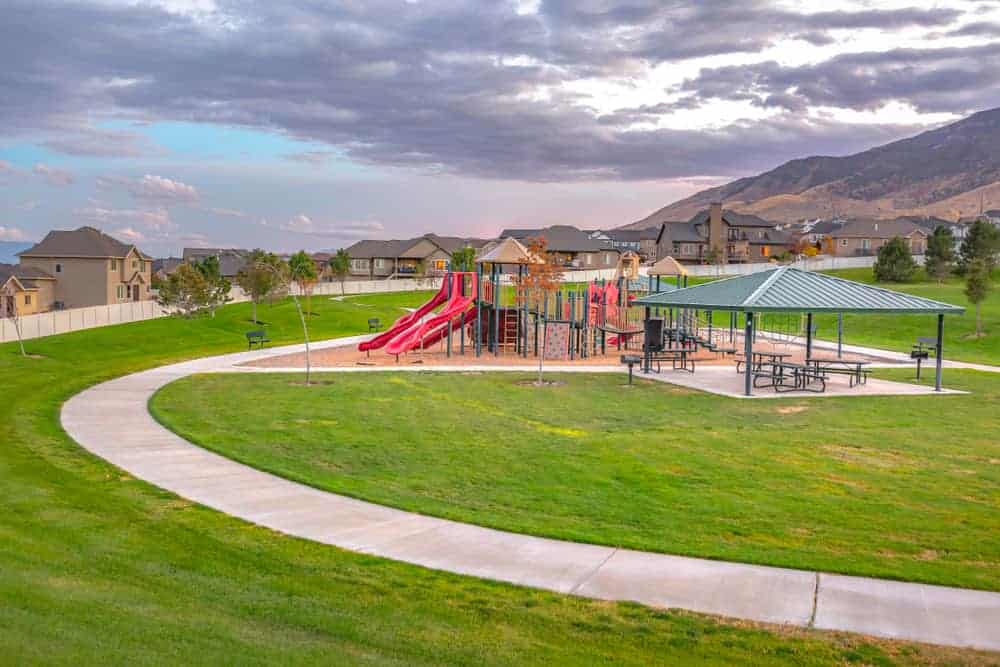 Saratoga Springs weather during the summer brings dry temperatures between the upper 50s at night and the low 90s during the day. Temps cool off quite a bit when the winter months roll around, reaching lows in the teens and highs in the mid-30s.

Are you ready to call Saratoga Springs home? If moving to Saratoga Springs is the right choice for you, we have efficient Saratoga Springs movers who are professionally trained to assist you. Get in touch with Wasatch Moving Company today by calling (801) 770-0765 or complete the Request a Quote form above for a free moving estimate!