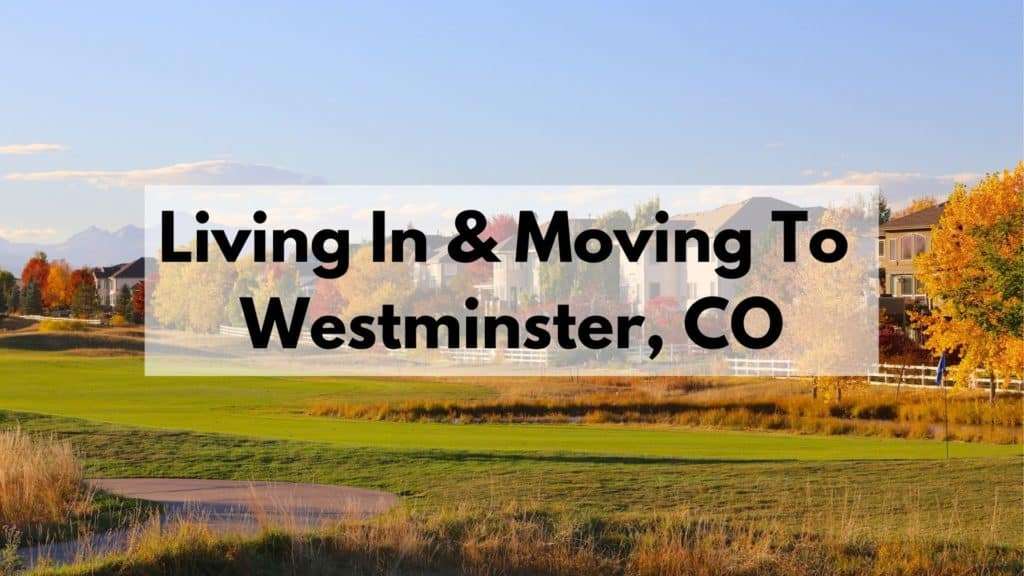 Less than a 20 minute drive from downtown Denver is the suburban city of Westminster. Like many cities in the west, the discovery of gold in the 1850s brought the first settlers to Westminster. The area was initially named DeSpain Junction, after the first official settler, Pleasant DeSpain, who built his 160-acre farm near present day Westminster’s West 76th Avenue and Lowell Street in 1870. Soon, the railroad reached the area and the population grew. The turn of the 20th century saw the completion of Westminster University of Colorado, which was dubbed the “Princeton of the West.” In 1911, the city incorporated and was renamed Westminster after the university. It remained largely rural until the Denver-Boulder Turnpike was built, increasing the population and bringing bigger businesses to the area.

Today, Westminster is considered a great place to live, even landing #24 on Money magazine’s Best Places to Live list in 2006. Those moving to Westminster will enjoy beautiful mountain views, lots of recreational opportunities, and easy access to nearby Denver. If you’re thinking of making Westminster your next home, let our experienced professional Westminster movers help you get here!

Westminster is a safe city with 27% less violent crime than the national average.

About 35% of Westminster residents rent their homes. Average rent for an apartment in Westminster is $1,643, which is about the same as nearby Denver.

Westminster is divided into many neighborhoods and developments. The northern end of Westminster has a more spread out, suburban feel. The southern half of the city has more historical homes, and access to the more desirable Adams County school district schools. If you’re looking for a townhome or apartment, check out Madison Hill. If you want to be near lots of greenspace and the city’s country club, Legacy Ridge might be a great fit, though homes come with about a $500,000 price tag.

The Westminster climate is classified as semi-arid, meaning that winters are very cold and dry, and summers are hot. Weather here is fairly mild, but can be unpredictable due to the proximity to the Rocky Mountains. The most pleasant months in Westminster are June, August, and September. July is the hottest month, with a Westminster average temperature of 89.5°F. December is the coldest month in Westminster, and nighttime temperatures average 17.8°F. Westminster receives about 17” of rain and 64” of snow every year.

Things to Do in Westminster

With Westminster being set against such beautiful scenery, it’s no surprise it’s a very active community. Those living in Westminster love hiking, biking, and organized sports at the more than 50 parks and green spaces in Westminster, and the city is very dog friendly. Here are some other activities Westminster has to offer:

If you’re looking for fun things to do with kids, Adventure Golf and Raceway is the place to go!. It’s easy to spend a day at this outdoor attraction. Whether you need a date night in Westminster or just a fun family activity, this is where you’ll want to be.

Golf is a major pastime in Westminster, and residents have several courses to choose from. Perhaps the most unique is the Walnut Creek Golf Preserve. This golf course offers 18 holes set among 215 acres of wildlife that’s listed as an Audubon Certified Signature Sanctuary. It’s sustainably managed to preserve and support wildlife, creating a breathtaking experience. Walnut Creek also offers junior classes, so it’s a great opportunity for families

Additional Things to do Near Westminster

If you move to Westminster, you’ll have tons of dining experiences at your fingertips! Westminster has an amazing array of restaurants, with menus from all over the world. Here are some of residents’ favorite eateries:

A post shared by Big Mac and Little Lu’s🦞 (@bigmac_littlelus)

If you’re looking for amazing, creative seafood, head to Big Mac & Little Lu’s. This family owned and run restaurant only cooks with the freshest of ingredients – they don’t even keep freezers in their kitchens! It’s a relaxed, affordable restaurant that’s great for the whole family.

One of the top-rated restaurants in all of Westminster is Aspen Lodge Bar & Grill. You’ll feel like you’re in a mountain lodge while choosing among Mediterranean, Mexican, American, Turkish and Italian dishes. It’s locally owned and casual, and it’s full bar and drink specials make it a great place to unwind.

Most Westminster residents commute to work. A typical commute in Westminster is about 25.5 minutes, only slightly higher than the national average of 25.3 minutes. Almost 80% of workers drive to their places of business alone. Less than 4% of residents use public transportation to get to work. Will you be commuting from Westminster to Denver? If so, click here for directions from Westminster, CO to downtown Denver, CO – it’s just ten miles away!

Does Westminster sound like the place for you? If moving to Westminster is on your horizon, you’ll want the best moving company around to assist you with your relocation. Our dedicated team of highly trained movers will give you amazing service at a price that works within your budget. Call us today for a free quote!