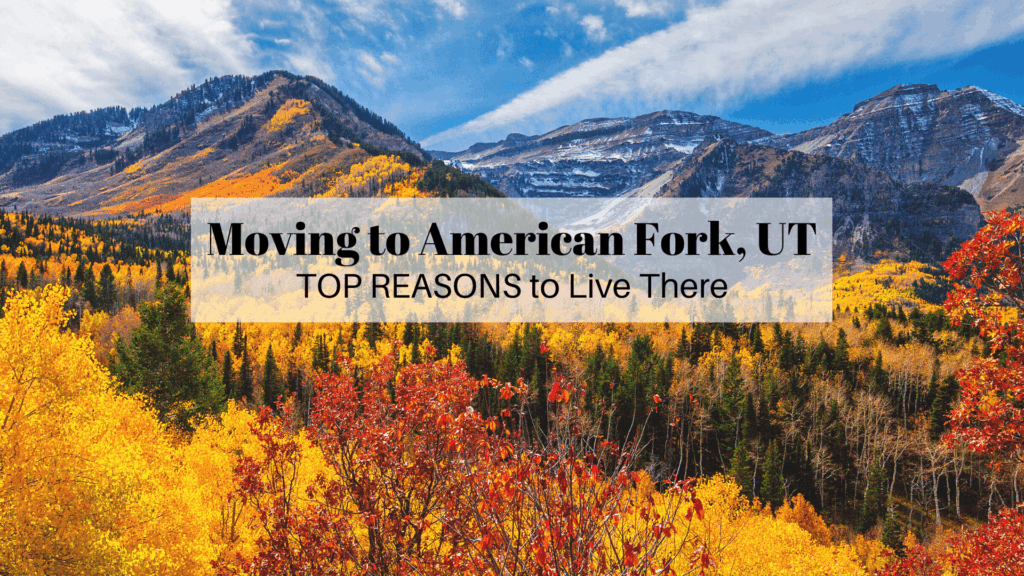 Located about 30 miles south of Salt Lake City and 14 miles north of Provo in Utah County, American Fork is a thriving suburb home to dozens of parks and a young, growing population. Moving to American Fork, UT means surrounding yourself with nature and enjoying small-town charm with all of the opportunities of the city just within reach.

The American Fork population is 28,500, making it the perfect mid-size suburb of Provo and Salt Lake City. The city is known for its young population and high number of families with a median age of just 27.8 — far younger than the U.S. median age of 38 years. That’s no surprise with the city’s high number of young professionals in the tech industry, top-rated public schools, and four colleges and universities just minutes away.

Most people in American Fork belong to the Church of Jesus Christ of Latter-day Saints (LDS Church) with a history in the community going back to 1851. Still, other religious communities are represented with churches and groups that include Baptist, Jehovah’s Witness, Presbyterian, and Catholic.

One of the best indicators of a city’s affordability? Housing costs. If you’re planning to rent while living in American Fork, you can expect an average apartment rent of $1,156 for a two-bedroom apartment. The median home value is $243,700. When you’re ready to start planning your relocation, you can check American Fork, UT homes for sale to get a better idea of what your budget will get you.

Once you’ve decided that moving to American Fork, UT is the right move for you, it’s time to narrow down your options and decide where you want to live. American Fork is a fairly small city but it’s home to a few distinct neighborhoods, each with something to offer.

The city center neighborhood of American Fork is found between I-15 and Route 89. This area is popular with renters and it’s where most of the shopping and entertainment is found. Plus, you’ll have a short commute on I-15. The W State Rd/W Main St area is one of the best neighborhoods for families as it boasts the most parks while the N 200 E/E 700 N neighborhood is home to the high school, the Fox Hollow Golf Course, and the Art Dye Ball Park for softball games.

If you are looking for an American Fork Utah real estate agent, we recommend Millie Killpack.

Located in the Wasatch Front region of Utah, American Fork has the temperate climate typical of Utah but it tends to get chilly, especially at night, and it’s the coldest region of the state. Still, temperatures rarely drop below 7°F or get above 97°F in the summer so you’ll avoid most extremes when living in American Fork.

American Fork weather tends to stay dry throughout the year with just 18 inches of rain per year on average. The U.S. average, by comparison, is 38 inches per year. In exchange, you can expect plenty of snow with 43 inches per year compared to just 28 inches on average in the U.S. You don’t need to worry too much, though; the mountain resorts in the area tend to get most of the snow and it usually doesn’t slow down too much.

You’ll still enjoy an average of 222 sunny days every year!

Fun Things to Do & Restaurants in American Fork, UT

High above American Forks is the unique cave system on Mount Timpanogos. Explore the three explorable canyon caves known for their bright colors and stunning stalactites.

Love haunted houses? Haunted Forest has been frightening and delighting for more than 20 years with 40-minute treks through the haunted woods of American Fork.

Vizzini’s is the only 90-minute escape room in Utah and it’s an escape room done right with clever props and puzzles that will have the whole family laughing and working together.

When relocating to a new city, it’s always important to know where to grab the best burger. You’ve found it with JCW’s The Burger Boys is an American Fork top place to eat, which serves up gourmet burgers, hot sandwiches, and delicious shakes.

Nazca Grill is so good, you’ll forget you aren’t in Peru! Start your meal with Papa a la Huancaina, cheese-drizzled potatoes topped with hard-boiled egg, then enjoy the Saltado de Pollo, or Peruvian stir-fry.

American Fork is a great place to live for employment opportunities, especially in education, health care, information technology, and financial services. Residents have a median household income of $70,926 which slightly exceeds the Utah median and far exceeds the median annual income of $60,336 for the U.S.

American Fork is strategically located between Provo and Salt Lake City — a perfect choice for commuters. You’re just 14 miles to Provo, frequently named one of the Best Small and Medium-Size Cities for Jobs. In fact, Forbes calls it the “Utah Model” that has made smaller cities in the state so successful at attracting talent and employers. Since 2011, employment is up an astonishing 29% in the Provo-Orem metro area, including American Fork.

Planning a longer commute than Provo and need to travel from American Fork UT to Salt Lake City? Click the link to see how to make the short drive.

Major employers in the area include:

More than 30% of people in American Fork have a bachelor’s degree or higher. That’s no surprise given the city’s excellent public school system and nearby colleges and universities. American Fork is served by the Alpine School District which has 87 schools in the county and enrollment of almost 77,000. There are also several charter and private schools to choose from like the Odyssey Charter School for K-6.

Tips for Moving to American Fork

If you’re looking for an affordable, laid-back lifestyle close to major cities in the Wasatch Front, American Fork is a dream come true. Residents love the space, friendly neighbors, beautiful scenery, and strong economy — all of which contribute to American Fork’s rapid growth. When you’re ready to start relocating to American Fork, UT, you can count on the friendly American Fork movers at Wasatch Moving for a worry-free transition to your new home. Give us a call at 801-770-0765 to get started with your move.