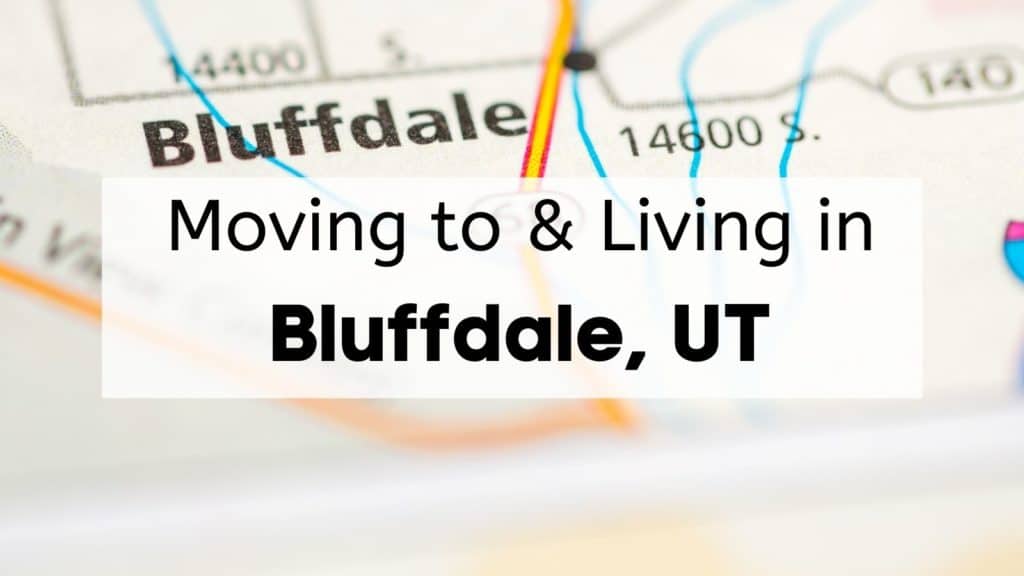 Bluffdale, UT is a fast-growing city located about 20 miles south of Salt Lake City and the Great Salt Lake, and just 5 miles north of Utah Lake. Bluffdale was incorporated in 1978, and named after it’s many bluffs and dales. Bluffdale is a crossroads for utilities and transportation between Utah County and Salt Lake County, and as a result of connecting the residents of the two counties, Bluffdale’s motto is “Life Connected”.

For a short period of time, Bluffdale was called ‘Mousley’, after the Bishop of the newly formed Church of Jesus Christ of Latter-day Saints in 1886.

Bluffdale is not an overly diverse city, with 89% of the population being white, 5% Hispanic, and 3% black.

If you’re thinking about living in Bluffdale you’ll be happy to know that Bluffdale is an extremely safe place to live, with 96% of cities being more dangerous and the rate of crime only 9 per 1,000 residents. However, if you are moving to Bluffdale, look at the southwest portion of the city as it is considered the safest area.

The Bluffdale Police Department is committed to maintaining a high quality of life for the residents of the city. They employ 4 full time police officers, as well as investigators and administration staff.

Cost of Living in Bluffdale, UT

Bluffdale, UT Neighborhoods | Where to Live in Bluffdale

The city of Bluffdale divides Utah County and Salt Lake County. It’s conveniently located near I-15 and major highways that get you anywhere you need to go around the area, like Redwood Road and Bangerter Highway. Bluffdale’s rapid growth gives the city both established neighborhoods and charming new communities, including:

If you’re looking for townhomes and lower maintenance living, Porter’s Point offers mainly townhomes. It offers scenic water and mountain views to the east and west and is located near the East Jordan Canal.

Just east of the Jordan River Canal, Liberty Cover offers amazing views of the river to many homeowners. But you aren’t left out of the mountain scenery here, as you can see the Oquirrh Mountains to the west or look to the east for a glimpse of the Wasatch Mountains.

Known for a neighborhood where people settle down to raise their families, Westgate is mostly single-family homes. The Westgate neighborhood of Bluffdale is one of the city’s more established neighborhoods.

Bluffdale has all four seasons, although most people refer to them as the hot season, cold season, wet season, and dry season rather than spring, summer, fall, and winter. The hot season is also the dry season, and lasts about 3 months from June to September. The average daily temperatures remain above 80°F and July will send most people in search of air conditioning, with the average high of 91°F and lows only reaching 65°F.

July is also the driest month of the year in Bluffdale.

April showers (bring May flowers) are an actual thing in Bluffdale, with an average of 7 wet days bringing at least .04 inches of precipitation throughout the month. You might start to feel like a duck in Bluffdale between September and June, as the wet season lasts over 8 months!

Things to Do in Bluffdale, UT

The city of Bluffdale is mostly a residential area, but there is no shortage of things to do within a few minutes drive to the outskirts of the city.

The House from Disney’s UP

After watching the movie with the kids, drive over to Herriman to see the house in real life! It’s a fantastic and affordable family outing. You can drive by and take a peak, or book a photo shoot.

Amazing family park with a free splash pad for all ages in the summer months. You can find shaded or sunny areas to sit, pavilions, and picnic areas. The playground is a lot of fun and features a zipline and giant slides, basketball courts, tennis courts, and there are giant rocks all over the park that the kids like to climb on.

Other Things to Do Nearby

There is a variety of restaurants located along the outskirts of the city whether you’re craving Mexican, American, Italian, our pub classics.

Redemption is a sports bar with the added bonus of an upper level island-themed Tiki Bar on the outdoor patio. You can watch the sun set over Salt Lake City while enjoying a cocktail. The menu features “appeteasers” to start your lunch or dinner off right, with their famous trash-can nachos or ‘fire in the hole’ cauliflower with hot sauce.

If you’re looking for an eatery to bring the kids, check out Jim’s Family Restaurant for affordable and delicious breakfast or American entrees like steaks, seafood, salads, and desserts. Breakfast is served anytime of day, and the extensive kids menu is sure to offer something for reven the pickiest eaters.

If you want to work for the government, check out this list of jobs in Bluffdale.

Many residents of Bluffdale make the 40 minute commute from Bluffdale to Salt Lake City to take advantage of the job opportunities with large corporations located there.

Tips for Living in Bluffdale, UT

When you’re ready to pack up your belongings and relocate to Bluffdale, don’t try to do it all on your own. Professional Bluffdale, UT movers like Wasatch Moving Company are here to help. Give us a call today at (801) 758-0030 for a free, no-obligation quote.