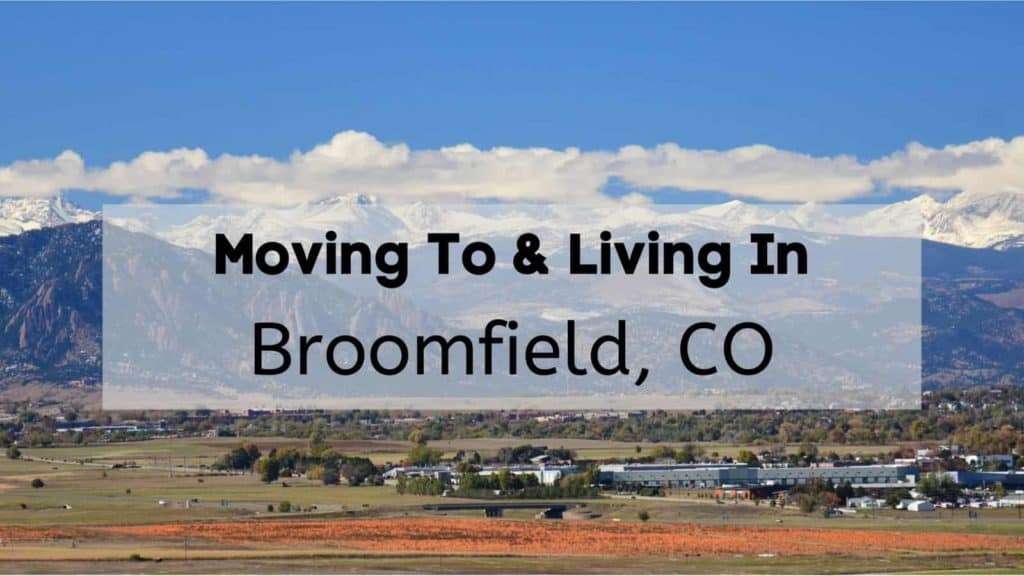 Just north of Denver and south-east of Boulder, with lovely views of the nearby Flatirons, Broomfield is an affluent suburban-city combo community with plenty to live for all sorts of folks! Broomfield is actually its own county as well as a city, which came about because the city was initially split by four counties — a bureaucrat’s nightmare! Broomfield came to be by way of railroad junctions and stations, as is the story for many cities during the late 1800s in America. The city was incorporated in 1961, around eighty years after the area had initially been settled, and likely got its name from the broomcorn which used to be grown in the area.

Nowadays, Broomfield is a self-sustaining city that also benefits from a border with the state’s capital, which means all sorts of opportunity! Naturally, a unique city like this also has a unique population, with notable people such as professional wrestler Vince Russo and OneRepublic guitarist Drew Brown choosing to make their home here.

Thinking about moving to this community, but wondering if Broomfield is a safe place to live? With a score of B- on Areavibes, Broomfield is certainly a safe city! Broomfield’s crime rate is actually 20% above the national average, but this is because of its high property crime, which is 37% higher than the average. However, violent crime is almost nonexistent here, being 72% lower than the national average. Simple best practices like being sure your car doors are properly secured will likely alleviate all potential issues with crime in Broomfield.

Cost of Living in Broomfield, CO

Broomfield is affluent, and as with most affluent communities, prices are generally going to be higher than the average, as shown with the cost of living here being 20% higher than most places in the United States, according to Payscale. Homes in Broomfield will cost you around $481,000, which is around 25% higher than the average Colorado home price of $394,600, meaning housing will be by far the most pricey thing about Broomfield. If you choose to move to Broomfield, you’ll find that you’ll be paying more for things like transportation, but less for groceries and utilities. Renting is fairly expensive, although perhaps not as expensive as Denver or Boulder, at an average of $1,629 per month for all units.

Housing will be the heaviest weight on your wallet when you relocate to Broomfield, but don’t let that get you down! Compared to many other affluent communities in the US, Broomfield may just surprise you with how affordable it is!

Broomfield is bursting at the seams with excellent choices for local communities! Whether it’s one of the newer developments or one of the older suburbs you choose, Broomfield has parks, attractions, and all the amenities you’ll ever need! Check out some of your neighborhood options below:

Properties in Broomfield are varied, meaning you’ll be able to live in whichever situation suits you best. For instance, Main Street is for those who want an urban life, just a hop, skip, and a jump away from all of Bloomfield’s best amenities and opportunities. Meanwhile, the more affluent, rural properties in the Baseline Road area will suit those who want a more quiet life just fine.

If you want to make yourself a part of any of these communities, you should check out the latest listings for homes for sale in Broomfield, CO.

If you want to know where things are, check out this map of Broomfield.

Also all neighborhoods benefit from the many amenities of the Broomfield Parks and Rec department.

Colorado has a good balance, with plenty of sunny days as well as lots of snow in the winter, perfect for skiing. Lack of humidity means the cold won’t be as frigid as out east. You can expect lows of 18 degrees Fahrenheit during the winter months, and highs of 90 degrees Fahrenheit during the summer months. Broomfield experiences less than the average amount of rainfall when compared with the rest of the United States, with 16 inches per year as compared to 38 inches. Meanwhile, Broomfield experiences much more snow than the national average, with 58 inches as compared to 28. The best times to visit Broomfield, in terms of comfort rating, are June and September.

Things to Do in Broomfield, CO

Broomfield has everything you need right here, which means you won’t have to hoof it to Denver to have a great experience! Whether it’s shopping or fun attractions for the whole family, Broomfield has got you covered! Check out shopping centers nearby like the Orchard Town Center and Flatiron Crossing shopping malls for all your shopping needs! You should also check out some of the best things to do in Broomfield, CO below:

Remember those parks we were talking about? Broomfield Community Park is an excellent example! A lighted sports field, playgrounds, an outdoor pool, and even batting cages can all be found here. There are few outdoor activities this park doesn’t accommodate!

Escape rooms! They’re all the rage nowadays, and Broomfield has not bypassed this fad. When locals want to put their minds to the test, they come to Themescape. Offering different rooms with different puzzles, this one is sure to twist your brain at some point!

Places to Eat in Broomfield, CO

Alongside its host of things to do, Broomfield is also home to plenty of great eats! Check out some below:

You might not usually think of the hotel cafeteria when you think of eateries that you have to visit, but The Burns in Broomfield is different — trust us! Technically attached to the luxurious Hilltop Inn, The Burns prides itself on being a true replication of a British pub here in the States, with excellent menus and even more excellent drinks!

Styled like a 50s diner, Great Scott’s Eatery is a favorite among Broomfield locals for its excellent American and Mexican dishes, perfect for a night out!

Broomfield is served by a few districts, most notably the Adams 12 Five Star School District, which has 29% of their schools rated “Above Average” by Greatschools, and the Jefferson County School District No. 1, with 34% of its schools rated “Above Average”. You’ll certainly not be starved for options, as 60 schools are within Broomfield limits. Some highlights in terms of local schools include the Prospect Ridge Academy and Thunder Vista P-8. You can rest easy knowing your child will be in good hands during your stay in Broomfield!

The Broomfield library offers free services to students of all ages.

Those planning on making a living in Broomfield should know that wages have been static while cost of living has been rising, according to Payscale. The most popular positions of employment are Software Engineer, Mechanical Engineer, and Operations Manager. The largest employers in the Broomfield area are Ball Aerospace, CenturyLink, and Vail Resorts, Inc.. The average salary for a worker in Broomfield is $76k a year, while the average hourly wage is $19.76.

Broomfield has plenty of opportunities for those with the skills and mindset to take them! Check out the latest listings for jobs in Broomfield, CO here.

Ready to take that last step and start your journey to making Broomfield your new home? Give Wasatch Moving a call at 720-798-2878! Our crew of highly-trained professional Broomfield movers will ensure your move is a stress-free process at affordable rates! Call now or fill out our online form for a free quote!