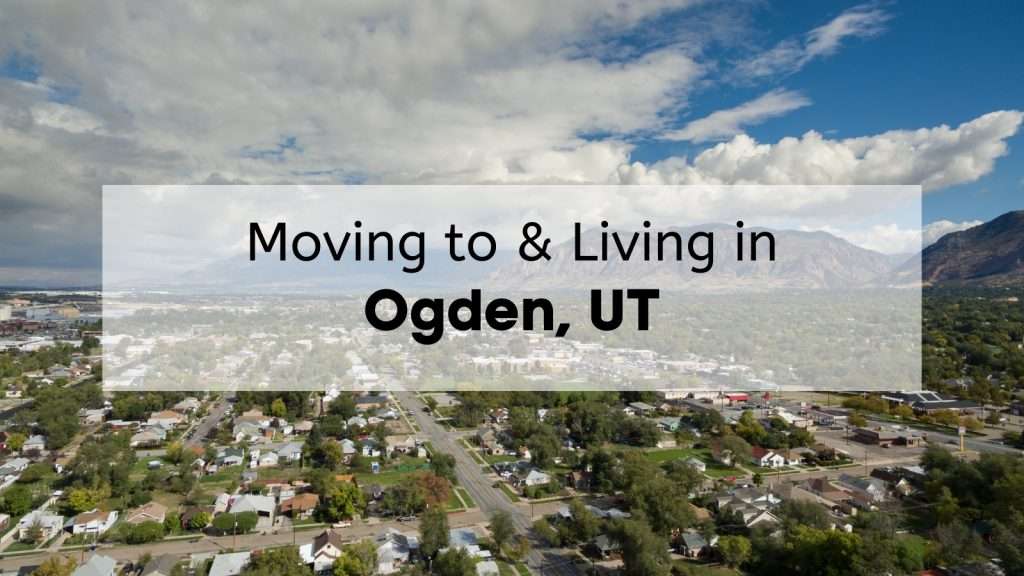 Are you thinking about moving to Ogden, Utah? Ogden is a city in Northern Utah situated just 10 miles east of the Great Salt Lake. Established in 1846, Ogden was the first permanent settlement by people of European descent in what is now Utah. Today, Ogden is known for its historical buildings, beautiful landscapes, and as the home of Weber State University. As such, Ogden, Utah is a good place to live.

Where is Ogden, Utah?

Ogden, Utah is in Weber County and is the county seat of the area. Ogden is the principal city of the Ogden-Clearfield, Utah Metropolitan Statistical Area, with a population of 597,159. It’s about 69 miles from Ogden to the  beautiful Wasatch Mountain Range. 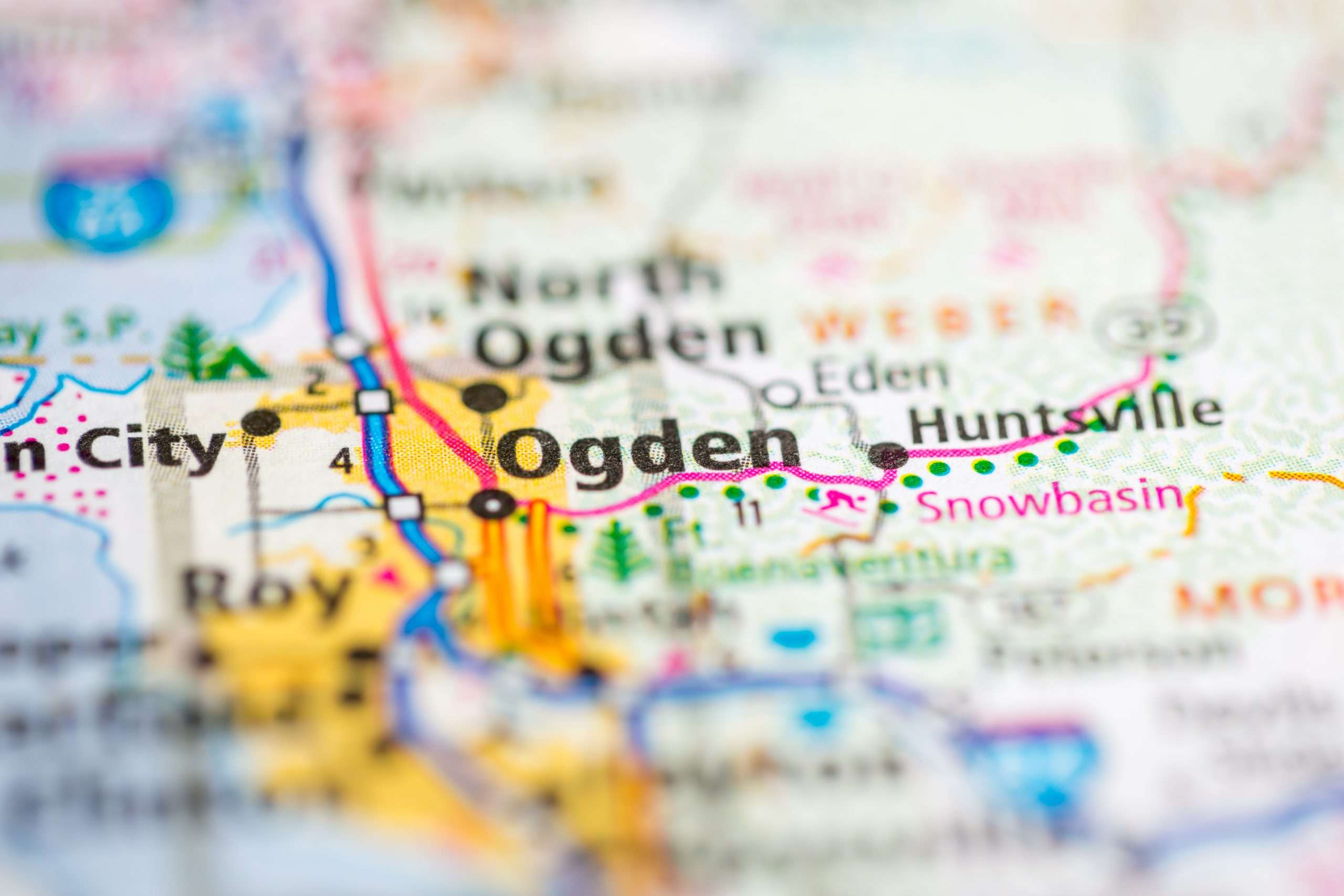 Ogden is close to many major Utah cities. It is about 38 miles (38 minutes) from Salt Lake City to Ogden, Utah and 68.5 miles from Ogden to Park City. Ogden’s close proximity to these major cities makes it easy to take quick day trips whenever you want. Ogden is bordered by the towns of South Ogden, Roy, West Haven, Marriott-Slaterville, Farr West, Pleasant View, and North Ogden.

The population of Ogden is 87,321, which is a 5.4% increase from 2010! Ogden is the eighth most populous city in the whole state of Utah. This city is dominated by young people, with 20% of the population falling between the ages of 20-29 and the median age being 33.2. This is largely due to Ogden being the home of Weber State University, a public university with an enrollment of over 26,000.

The city of Ogden is bypassed by major highways and interstates, with US-89 running through the area as Washington Boulevard, which serves as the main street in Ogden.

When living in Ogden, Utah, you can take advantage of the Utah Transit Authority’s four bus routes running directly to Salt Lake City, Bringham, and other cities in Weber and Davis counties. The FrontRunner commuter rail also runs between Salt Lake City and Pleasant View and includes a stop at the Ogden Intermodal Hub.

The closest airport to Ogden is the Ogden-Hinckley Airport (OGD). Allegiant Airlines serves this airport and offers commercial flights to Phoenix and Mesa, Arizona. If you want a wider variety of travel destinations, you can head 39 miles south to the Salt Lake City International Airport (SLC). SLC has over 300 scheduled nonstop airline departures daily to over 90 cities in North America and Europe.

Cost of Living in Ogden, Utah

According to the Economic Policy Institute, a family of four would need to earn $82,829 per year to afford to live in Ogden. The MIT living wage for two working adults with two children in Ogden is $22.30. This means that each adult would have to earn $22.30 per hour at a full-time job to support themselves and their family. If just one adult is working, the living wage is $35.99.

When living in Ogden, Utah, you can expect to pay below-average taxes. The median property tax in Ogden is $1,289. This is low compared to the average property tax in the United States, which is $2,471. The Ogden, Utah sales tax rate is 7.10%, and the Utah individual income tax is a flat rate of 4.85%.

When it comes to living in Ogden, it is important to understand that rent and housing will be a big part of your expenses.

Are you looking for homes for sale in Ogden, UT? According to RedFin, the Ogden average home price is $350,000. This comes out to about $200 per square foot. This is slightly lower than the national average of $393,935. The Ogden real estate market has slowed down a bit, with homes staying on the market for an average of 51 days compared to 15 last year.

As of 2022, it is generally cheaper to rent a home in Ogden rather than to buy one.

Ogden Neighborhoods | Where to Live in Ogden

If you are moving to Ogden, then you may be curious about the best places to live in the area. Some popular neighborhoods include Downtown Ogden, Mount Ogden, and Hillcrest-Bonneville.

If you are looking to rent an apartment in the center of the city, then Downtown Ogden, otherwise known as the Ogden Central Business District, is perfect for you. This area is right in the center of the action and is home to many of Ogden’s best restaurants and shopping centers. If you work in the downtown area, then you can easily get to work on foot or by bike. The average rent in the Ogden Central Business District is $1,458.

Mount Ogden is arguably one of Ogden’s hippest neighborhoods. This area is 2 miles away from Weber State University, so many students choose to reside in the Mount Ogden area. This is also a popular area among nature lovers, as Mt. Ogden Park is right in your backyard, providing you with running, hiking, and biking opportunities whenever you want. The average home price in Mount Ogden is $459,000.

The weather in Ogden, Utah is perfect for those who love both the heat and the freezing cold. According to the Köppen classification, Ogden, Utah experiences a humid subtropical climate. This means that Ogden experiences hot and humid summers and cool to mild winters.

The hot season in Ogden, Utah lasts from June 10 to September 13, with an average high of 80°F. Ogden summers are typically hot and dry, but there is a chance of thunderstorms during the monsoon season, which starts in early July.

The cold season in Ogden lasts from November 23 to February 25, the coldest month being January, with an average low of 23°F. Ogden winters are freezing and snowy, with an annual average snowfall of 65.3 inches. Many of the ski resorts near Ogden, Utah, see nearly 450 inches of snow each year!

There is no shortage of amazing restaurants in Ogden, Utah. Here are a few Ogden restaurants you can’t miss out on.

Pig & a Jelly Jar in Ogden is one of the best restaurants in Ogden. Stop by this wonderful restaurant between 8 AM and 3:30 PM any day of the week for delicious dishes such as chicken and waffles, pancakes, and mac and cheese (and don’t forget to add a mimosa on the side!).

A post shared by Pig & A Jelly Jar (@pigandajellyjar)

Located in the heart of Downtown Ogden, Tokyo Station is an upscale Japanese restaurant that is perfect for any special occasion or a fun night out. The chefs at Tokyo Station cook your food on a stove directly in front of your table, so there is no doubt the food is fresh!

Many people agree that Warrens Craft Burger is one of the best places to eat in Ogden. Take a seat in this cozy restaurant and enjoy one of the best burgers around. Warrens is perfect for any date night, boys’ night out, or family dinner. Warrens also has live music from time to time.

Things to Do in Ogden, UT

Searching for things to do in Ogden, Utah? There are many attractions for you to enjoy when living in Ogden. Here are just a few.

Map of Ogden Things to Do

There are no professional sports teams in Ogden, Utah, but you can enjoy a variety of college sports at Weber State University. Some of Weber University’s most popular sports include football, basketball, and cross-country. Many locals in Ogden enjoy skiing due to the city’s close proximity to many ski resorts. Some popular ski resorts near Ogden, UT include Snowbasin, Powder Mountain, and Nordic Valley.

Although there is crime in Ogden, it is important to note that, there are plenty of safe places to live inOgden. Most crimes happen in select neighborhoods where traffic is low, and gang activity is prevalent. In response to the crime rates, the Weber County Sheriff’s Office has put together a Street Crimes Unit which is already seeing amazing success.

Ogden is a large economic hub, with many jobs in finance and government. The Internal Revenue Service is the city’s largest employer, followed by McKay Dee Hospital, Weber State University, and Ogden City School District.

Serving students and residents in Ogden, Utah is the Weber County Library System.

Is moving to Ogden, UT in your future? Let the experts here at Wasatch Moving help you! Fill out our online form or give us a call today at (801) 758-0030 for your free, custom moving quote.