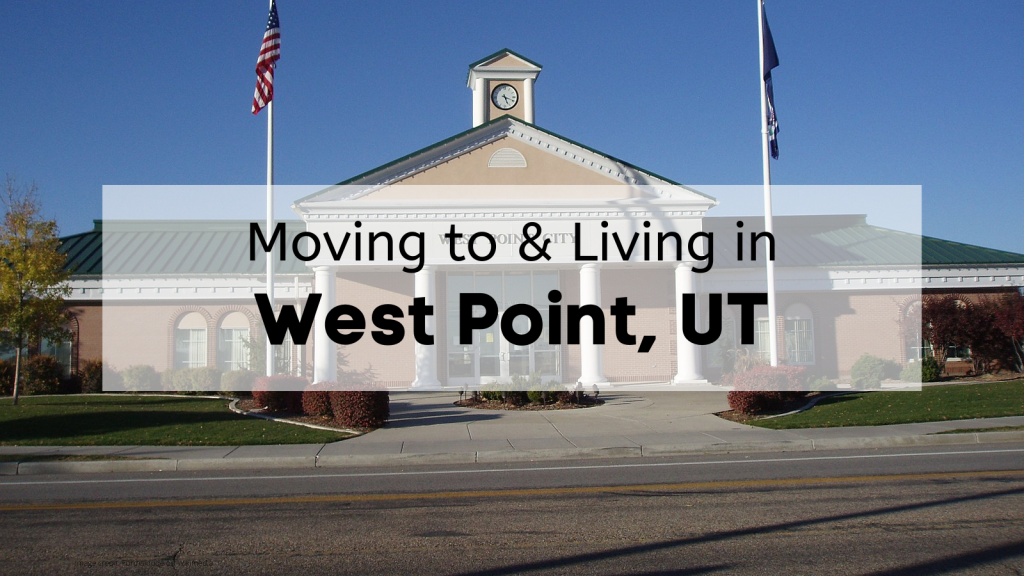 Is Living in West Point UT for You? | 🏘️ Why Moving to West Point Is so Popular

The city of West Point, UT is a suburb of Salt Lake City. West Point is a popular place to live thanks to its proximity to the Great Salt Lake. Because it’s surrounded by mountains and not far from the city, West Point offers the best of both worlds for those who seek it.

Where is West Point, Utah?

Some believe it’s named after the military school in New York, others think the name is due to its geographic location.

West Point borders Syracuse to the south, Hooper to the north, Clearfield to the east, and Howard Slough Waterfowl Management Area (an unincorporated area) to the west. The city is just a few miles away from Great Salt Lake.

The population of West Point, Utah is 10,963. This is an increase from the 2010 census which revealed 9,511 residents. West Point has an annual growth rate of 1.31% and population density of 1,540 people per square mile.

The majority of the population of West Point identifies as male; 46.3% identify as female.

West Point is a very safe place to live. It is safer than 79% of cities. West Point’s total crime rate is just 1.45 per 1000 residents. It has a reputation for being a quiet and safe city.

The city is serviced by the West Point City Police Department which is located in nearby Farmington, UT.

Cost of Living in West Point

According to the Economic Policy Institute, for a family of two adults and two children in the Salt Lake City Metropolitan area, you’d need to make about $86,552 yearly to live comfortably. Monthly childcare costs about $1422, transportation is $1189, food is $770, housing is $1204, and healthcare is $1204.

West Point Neighborhoods | Where to Live in West Point

Because West Point is a small city, there are no strictly defined neighborhoods. However, the eastern parts of the city are considered more desirable, so homes typically cost more there.

West Point is in the Western United States in a climate that experiences all four seasons. The average rainfall in West Point is 21 inches per year. It snows in West Point; the city gets about 33 inches of snow per year. Be sure to bring your snow boots!

The summers are mostly clear, dry, and hot, whereas the winters are extremely cold and snowy. The weather is typically between 24 degrees Fahrenheit to 91 degrees. It’s rare for West Point to get colder than 12 degrees or hotter than 98.

Things to Do in West Point

Whether you’re a nature lover or you prefer spending your time indoors, you will find that there are plenty of things to do in West Point and the surrounding area. If you’re going grocery shopping, don’t forget to stop by Smith’s Marketplace, a popular chain.

Here are some of the best things to do in West Point.

If you’re an avid golfer, you’ll love playing at Schneiter’s Bluff, a links-style course. It’s extremely well-maintained and will provide golfers an exceptional view of The Great Salt Lake and Antelope Island as they play.

Loy Blake Park is a public green space that features a playground. There are also areas for volleyball, tennis, basketball, baseball, and soccer. If you have a child, you’ll likely spend some time here.

East Park is another great place to bring your family to in West Point. You can bring your pets to run around here, plus there are walking paths, areas to play volleyball and soccer, and pavilions to enjoy.

Though West Point is small, it does offer a bunch of unique restaurants that are sure to please no matter what type of cuisine you are looking for. Here are some of our favorite West Point, UT restaurants.

West Point is extremely close to Salt Lake City so many people choose to commute to the larger city for work. The commute is relatively short and considered a worthy trade-off for those looking to raise their families in a suburban community.

You don’t need to commute into Salt Lake City for work, however. There are also roles available in or around West Point. Here’s a job board for roles in West Point if you’re looking for a new position.

According to Zippia, the average hourly wage in West Point is $24.

If you have school aged children and are considering moving to West Point, you may have questions regarding education. West Point is part of the larger Davis Public School District. The teacher to student ratio is 27 to 1. The district consists of 95 schools and has more than 72,000 students.

Get a taste of everything suburban life offers while staying close to city life and nature.

Moving to West Point? We can help.

West Point’s proximity to Salt Lake City and variety of things to do establishes it as one of the best places to live in Utah. Once you’re ready to make your move, call our West Point movers at (801) 758-0030 for a free quote.