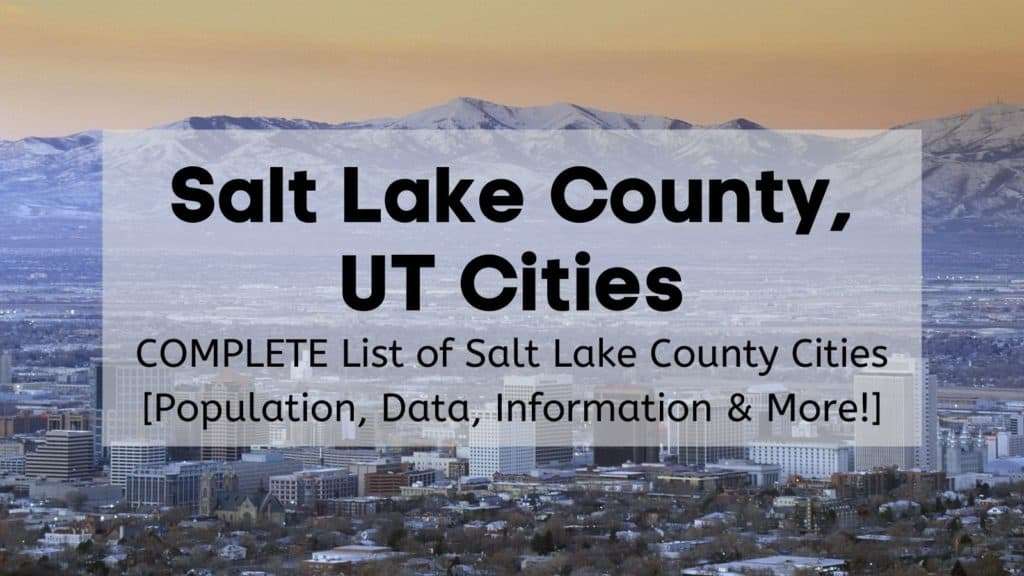 Are you visiting the Salt Lake City area or relocating to the Salt Lake Valley? Salt Lake County is the population center of Utah and known for its outdoor recreation with ski resorts, lakes, mountain trails, and city parks.

This guide explores the ten largest cities in Salt Lake County, Utah with demographics, attractions, and more. Note that this guide covers only Salt Lake County cities, not towns or census-designated places (CDPs) as defined by the U.S. Census Bureau. A CDP resembles a town or city, but it isn’t incorporated and it’s governed by the county government, not its own local government.

Here’s a full guide to the top cities in the county which includes some of the best Salt Lake City suburbs.

Salt Lake County is the most populous county in Utah and one of only 4 Rocky Mountain counties to rank in the top 100 nationally along with Clark County, NV; Denver County, CO; and El Paso County, CO. 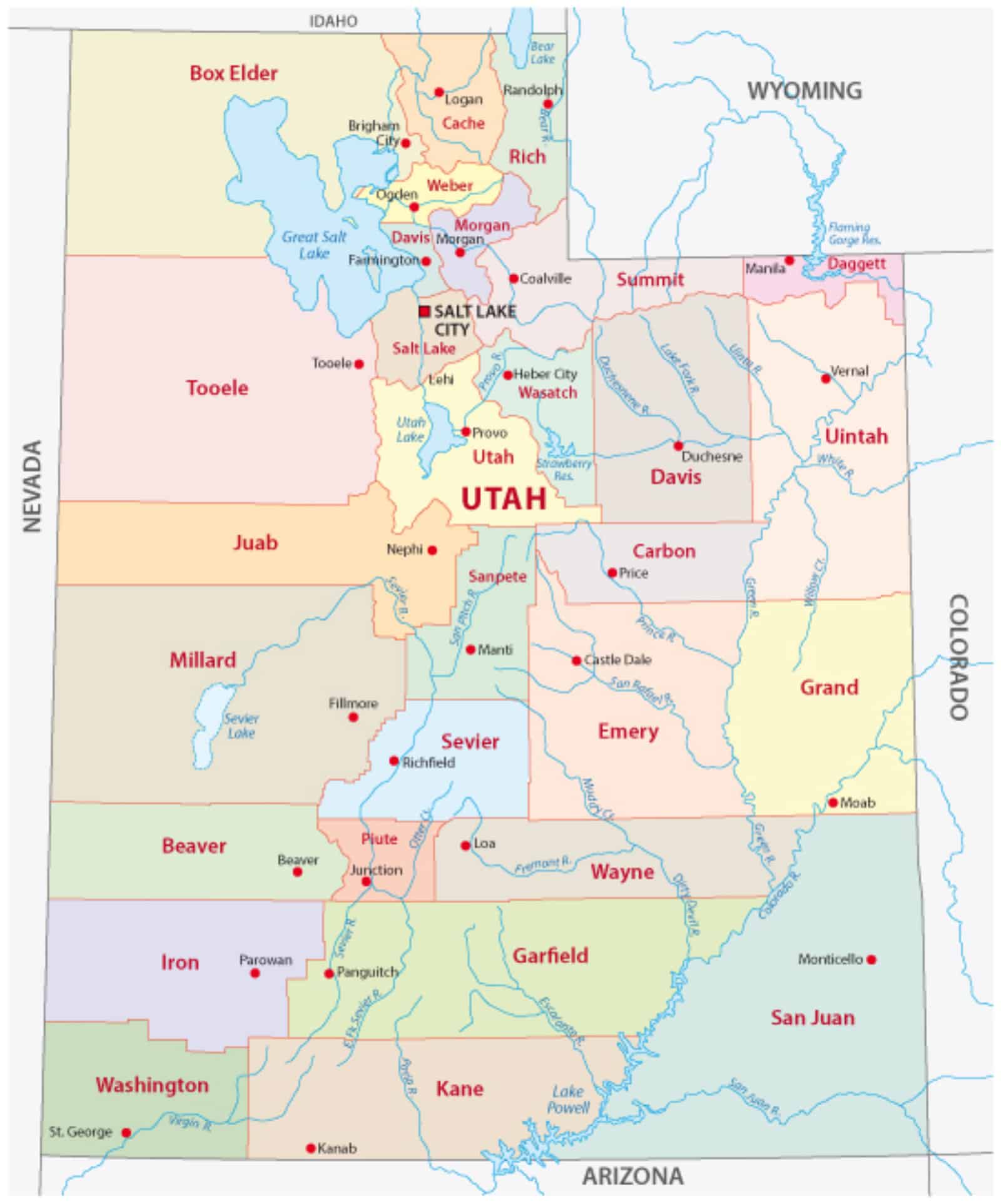 The LDS Church is central to the history of Salt Lake Country and still has a major influence on the region.

Today, Salt Lake City remains the global headquarters for the Church of Jesus Christ of Latter-day Saints, also known as the LDS Church or the Mormon Church. From Salt Lake County, Church leaders oversee operations in 160 countries. Downtown Salt Lake City is built around the headquarters, Temple Square, a 10-acre complex owned by the Church and one of the top attractions in SLC. 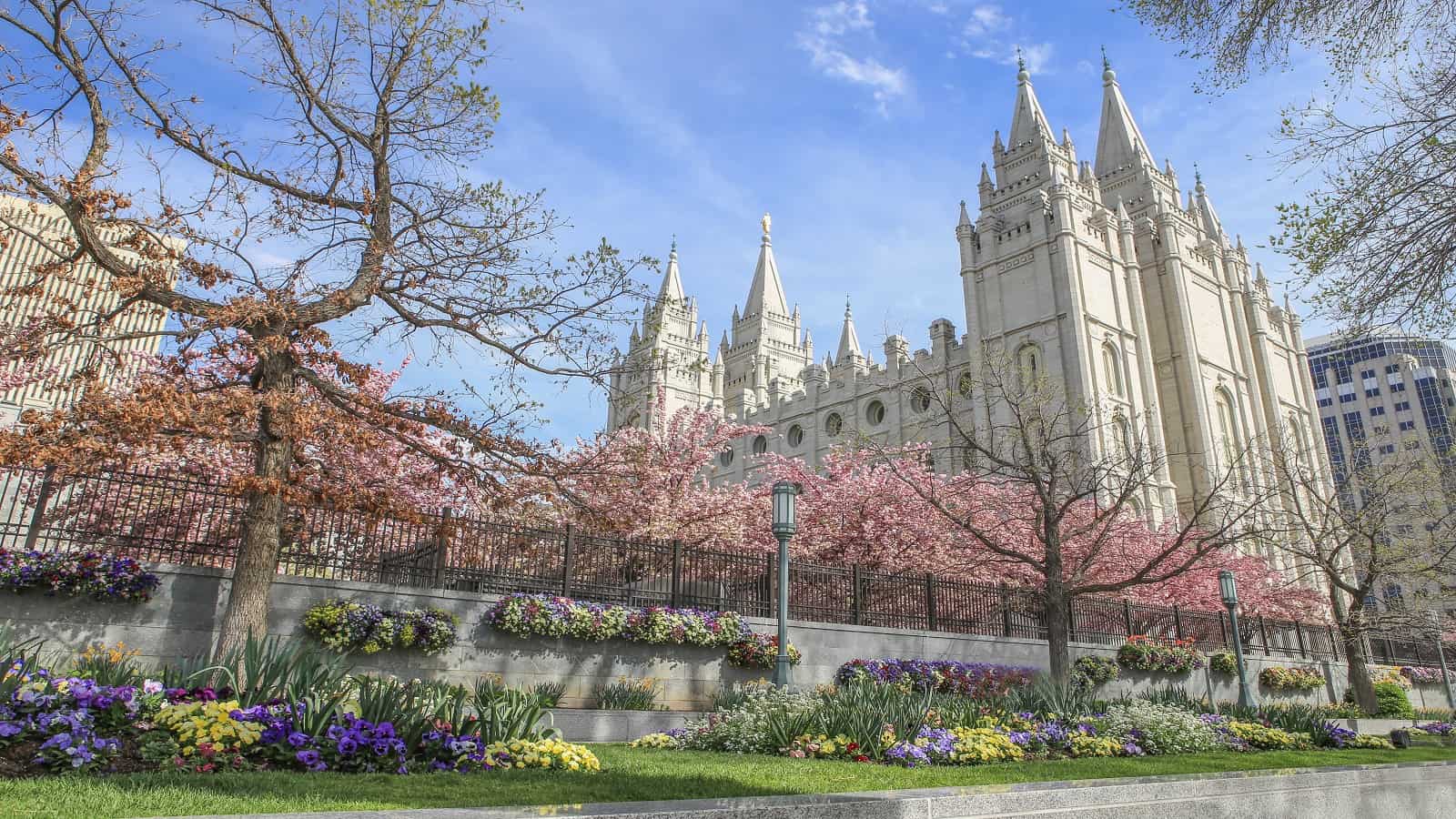 The Mormon influence on the leadership, culture, education, and economy of Salt Lake County is still apparent. The LDS Church operates or controls the region’s largest bank (Zions), the newspaper with Utah’s largest circulation (Deseret News), the top radio and TV stations (KSL), one of the largest private colleges (Brigham Young University).

The Church Welfare System assists people of all faiths around the world with an influence that’s particularly strong in the Salt Lake Valley. Welfare Square in Salt Lake City is a large complex owned by the Church that includes a bakery, cannery, Bishop’s storehouse, grain silo, fruit orchards, milk processing plant, and a Deseret Industries thrift store. Deseret Industries is a nonprofit thrift store organization run by the LDS Church, similar to Goodwill Industries.

Despite the strong ties to the Mormon Church in the region, Salt Lake County is minority Mormon now according to the Church’s membership records. In 2018, Salt Lake County dropped to 49% Latter-day Saint. This is the lowest rate of Church membership in at least 90 years. Overall, Utah is almost 62% Mormon.

Salt Lake City tops the list of cities in Salt Lake County by population. The anchor of the metro area and the county seat, Salt Lake is known not only for Temple Square and the Church of Jesus Christ of Latter-day Saints, but also its many attractions, beautiful scenery, and great quality of life. SLC boasts a strong tourism industry thanks to its outdoor recreation, particularly the nearby ski resorts. Thanks to the Greatest Snow on Earth, there are 10 ski resorts within an hour’s drive! It’s also one of the most culturally diverse and politically liberal places to live in Utah.

SLC was recently named one of the top 25 places to live in America – the only Utah city on the list. Salt Lake is one of the more affordable Salt Lake County cities to buy a home, and there’s always something fun to do. Residents enjoy family-friendly attractions. Here are just a handful:

Check out our guide to the best neighborhoods in Salt Lake City to explore more of the city.

West Valley City is the largest Salt Lake City, and it ranks second on the list of cities in Salt Lake County by size and the second-largest city in Utah!

Living in West Valley City is more affordable than SLC despite households having a higher median income. Combined with the short commute to the city, it’s easy to see why the city continues growing.

West Jordan isn’t just one of the top cities in Salt Lake County by population; it recently overtook Provo to become the third largest city in Utah!

What makes West Jordan a great place to live? The city offers easy highway access but less hustle and bustle than the big city. It’s also far more affordable than its neighbors, Sandy and South Jordan, with home prices about $100,000 lower! You’ll still enjoy convenient shopping and fun attractions like a trampoline park, two golf courses, and a botanical garden. The city’s crown jewel is Veterans Memorial Park with a new all abilities Wild West playground and a fitness and rec center with a public pool.

Sandy is one of the largest cities in Salt Lake County in the South Valley area. Sandy is bordered by South Jordan and West Jordan and about 19 miles south of downtown Salt Lake City.

Sandy was recently ranked as one of the best places to live in the U.S. thanks to its gorgeous scenery, outdoor recreation, and low crime rate. It’s one of the most affluent Salt Lake County cities with a great school district and several major employers. Sandy has become popular not only with families but also outdoor enthusiasts. Geocaching, rock climbing, skiing, snowshoeing, and golfing are just some of the outdoor activities you can enjoy.

One of the most exciting things about Sandy that’s contributing to its population growth is The Cairns, a transit-oriented and walkable city center. This master planned development will transform Sandy into several distinct villages over the course of two decades with an emphasis on nature-inspired design, population management, and sustainable living. This 1,000-acre city center will create a mixed-use downtown that blends suburban and urban living with Utah’s tallest building.

Want to learn more? Here’s a complete guide to living in Sandy plus the top things to do in Sandy, Utah.

Nestled in the Salt Lake Valley along the Jordan River is the city of South Jordan, one of the most affluent cities in Salt Lake County, Utah. The city is 18 miles south of downtown Salt Lake City and bordered by West Jordan, Sandy, Draper, and Herriman.

South Jordan is one of the fastest growing cities in Utah with a population that grew more than 50% within the last ten years. It’s easy to see why considering South Jordan’s excellent amenities, central valley location, and job opportunities. Most of the growth is attributed to the large master-planned Daybreak community that takes up the entire western half of the city. Development will continue for another 20 years and eventually contain over 20,000 homes and 9.1 million square feet of commercial space.

Millcreek is the sixth largest among Salt Lake County cities, but it’s also one of the newest cities in Utah. Millcreek was a CDP until it incorporated in 2016. It’s one of the most densely populated cities in the county, although its growth has slowed. The city is wedged between South Salt Lake and Salt Lake City to the north and Holladay and Murray to the south.

Millcreek is a largely suburban community with one of the county’s highest rates of college-educated residents. Most people living in Millcreek commute to Salt Lake City for work, but there are still plenty of things to do in the city like the popular Holladay Lions Recreation Center with indoor swimming.

Residents enjoy close proximity to downtown SLC as well as the airport, hospitals, and outdoor recreation. Taylorsville is transforming rapidly with the city master-planning a new commercial district and transforming the retail centers to make the city more walkable, urban, and sustainable. This means over the next decade, Taylorsville will offer even more employment and recreation opportunities – and likely higher home prices.

Check out our complete guide to moving to Taylorsville, UT to see if it’s the right place for you.

Herriman has the distinction of being the fastest-growing Salt Lake County city by far with growth over 150% within the last decade. The city of 55,000 added more than 33,500 people just since 2010! Much of the growth came from the addition of the Rosecrest housing project.

This affluent Salt Lake City suburb was a small, sleepy town of barely 1,000 just twenty years ago, but it’s now one of the most affluent cities in the Salt Lake Valley. Fortunately, home prices haven’t quite caught up to the growing demand, partly because of the city’s location more than 27 miles outside Salt Lake and close to Tooele.

What’s living in Herriman like? Residents enjoy the quiet, suburban lifestyle with plenty of outdoor recreation like the Rosecrest Splash Park and Blackridge Reservoir, a popular Herriman attraction with a playground and swimming along the beachfront.

Popular with families, Draper is home to some of the area’s top attractions like the Loveland Living Planet Aquarium, a Boondocks amusement center, Cowabunga Bay Water Park, All Star Bowling & Entertainment, and a trampoline park. It also boasts tons of outdoor recreation including hiking, golfing, cycling, and skateboarding. Draper has more than 100 miles of trails and 42+ parks like Draper City Park and the Draper Cycle Park.

Located next to West Jordan, Holladay, South Salt Lake, and Taylorsville, Murray is known as the Hub of Salt Lake County. It has one of the state’s lowest city tax rates, excellent employment opportunities, and outdoor recreation that make it popular with young professionals and families alike. The city boasts equestrian paths and hiking trails, the Murray Aquatics Center, the Park Center with indoor swimming, a large senior citizen rec center, tennis, fishing, an arboretum, and much more. All of this comes with a cost of living below the national average!

Is living in Murray the right choice for you? Check our complete guide to find out.

Here is a complete list of cities in Salt Lake County, sorted first by population, then other metrics from the US Census. Education Level is the % of the population that has finished high school. The Population Growth is from 2010 to 2019. If they exist, under Type, we have included cities, towns, villages, census designated places and more.

How many cities are there in Salt Lake County?

What is the most populous city in Salt Lake County?

The largest city in Salt Lake County is Salt Lake City, UT, the county seat, with a population of almost 200,000.

How many people live in Salt Lake County?

Which of These Largest Salt Lake County Cities Is Right for You?

Are you planning to relocate to the Salt Lake Valley? Each city on this list is small to mid-sized, even Salt Lake City, with a great quality of life, affordable living, and entertainment.

Once you’ve decided which city is right for your family, call Wasatch Moving Company to assist with a seamless moving experience so you can start enjoying everything your new home has to offer!

Please confirm deletion. There is no undo!