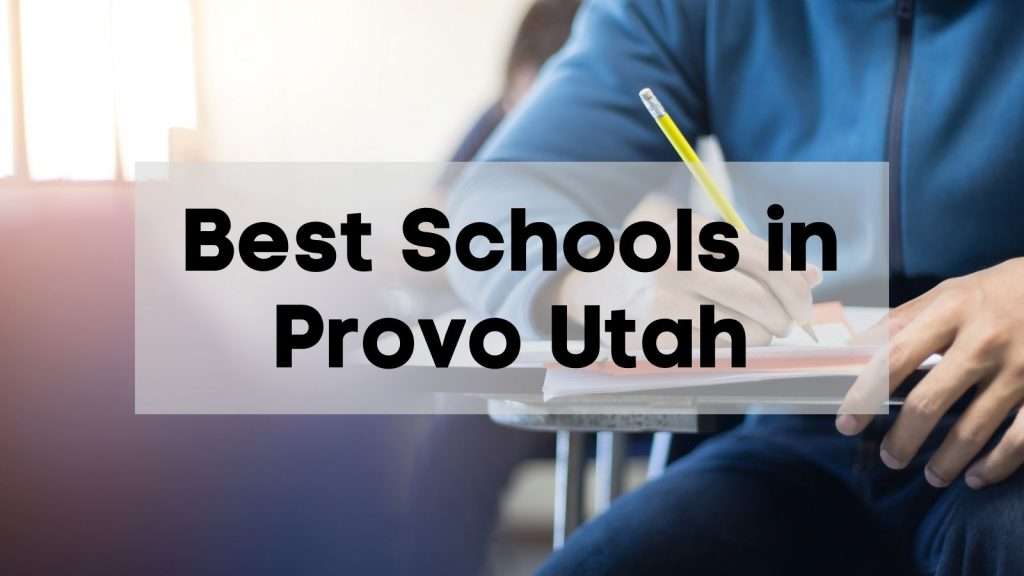 Are you moving to Provo, thinking about changing neighborhoods, or moving to the suburbs? If you’re moving with kids or planning to start a family in the future, choosing a neighborhood with good schools is probably high on your list. Here’s a look at the best high school and elementary school options in the area to help you find the best Provo school for your family.

The Alpine and Provo school districts have several of the top ten high schools in Utah including highly rated magnet and charter schools.

One of the best schools in Provo Utah for students interested in pursuing the arts, the Walden School of Liberal Arts has been recognized as one of the best charter schools and best high schools nationwide by US News. Students have the opportunity to participate in the International Baccalaureate program with a 38% IB participation rate.

Walden is a tuition-free public charter school in Provo that serves K-12 students with two internationally recognized educational models. Elementary students receive a Montessori education before creating a personalized “Walden Pathway” plan for their education in middle and high school. You can learn about their programs including the IB Program, CTE Pathways, and Casa After School Programs here.

Timpview High is the best traditional Provo school and ranked #10 in Utah by US News. More than half of students participate in AP courses with test scores that far exceed the district and state rates. The school also offers over 100 concurrent enrollment courses through Utah Valley University and Brigham Young University (BYU).

Timpview High School is in the Edgemont neighborhood, one of the best neighborhoods in Provo for families and also home to Edgemont Elementary, Provo’s #1 elementary school!

Freedom Preparatory Academy is one of the highest ranked Utah County charter schools with an impressive 98% graduation rate and 61% of students taking at least one AP course.

The school bills itself as “Utah’s most personalized charter school” through character development, helping students explore and develop their unique strengths, and allowing high school students to further their interests through hands-on experience and focused academics in five academies:

Starting in elementary school, Freedom Preparatory Academy students benefit from a personalized success plan that helps them achieve their potential.

Karl G Maeser Preparatory Academy provides a classical, liberal arts education and helps students live up to the Maeser attributes of Truth, Honor, and Virtue through the Socratic method that fosters critical thinking and lifelong learning. It’s one of the most desirable Utah County charter schools and ranked the #6 best high school in Utah by US News.

Karl G Maeser Preparatory Academy handles admissions through a lottery system with about 50% of 7th grade applicants accepted. With a 90% retention rate, higher grade openings are even more limited.

Recently ranked one of the 3 best Utah high schools, UCAS is a premier charter school in Provo for students who want to get a jumpstart on college. The school, located in Orem, UT just six miles outside Provo, is associated with Utah Valley University (UVU) and offers a STEM and college prep-focused education.

The most desirable elementary school in Provo Utah, Edgemont School is ranked #22 in the state. Edgemont offers a French dual immersion program and boasts test scores far above the Utah average. It’s one of the newest schools in Provo City School District with a $13.2 million facility built in 2017. It’s just across the street from Timpview, the best Provo high school.

Cedar Ridge is an exemplary elementary school near Provo, UT in the small city of Cedar Hills, although the mailing address is in Pleasant Grove. Ranked #20 among Utah elementary schools, Cedar Ridge boasts test scores well above the state average with a gifted program.

Highland Elementary is an A-rated school by the Utah State Board of Education with exemplary academic achievement and student growth. This highly rated Provo school is located in Highland, UT, a small Provo suburb. Highland Elementary is ranked #32 in the state by US News with a gifted program and the excellent Advanced Learning Lab (ALL) program. Parents love the early music program!

Ranked #42 in Utah by US News with an overall 93/100 score, Freedom Elementary in Highland is one of the best elementary schools in Provo’s metro area. Students have test scores far above the state and district average. Parents love the school’s excellent program for students with special needs and the overall support system for students.

Canyon Crest is ranked #2 among elementary schools in the Provo school district and #37 in Utah with an Exemplary rating from the Utah State Board of Education. Students achieve above-average test scores and demonstrate good academic progress at Canyon Crest. Parents love the high level of parental involvement with a strong PTA that does a lot of work with the teachers and kids. It’s one of six Dual Language Immersion elementary schools in Provo: Canyon Crest Elementary offers Spanish language immersion learning for students.

There are a handful of highly rated private schools in Provo and surrounding suburbs to consider. Most have scholarships and tuition aid available.

Ivy Hall Academy was founded in 1988 to provide a safe environment for children to develop life-long skills and prepare for careers. The school focuses on very small class sizes and an innovative mathematics program. Ivy Hall relocated in 2020 to Vintage Park in northeast Provo and expanded to include 9th grade, adding a grade level every year to become a PK-12 school.

Slope School offers a unique learning environment to help young students “learn how to learn” with hands-on learning based on the Acton Academy model. Learning is approached as a broad set of experiences to facilitate the development of knowledge, relationships, character traits, and habits. Students at the Acton Academy learn core academic skills, participate in hands-on projects to gain mastery, develop traits and habits they will need as adults, and participate in Socratic discussions to develop judgment and wisdom.

Arches Academy is an independent private school in Orem that offers interactive learning, small class sizes, and Singapore math. It’s the only school in Utah Valley that provides every student with a gifted and talented educational experience to empower students to engage in collaboration, think innovatively, and develop their innate curiosity. It’s been voted the best private school in Utah Valley since 2013!

Have you found the right Provo school for your children? Whether you’re relocating from another city on the Wasatch Front or changing neighborhoods in Provo, Wasatch Moving Company can help. Give us a call today for a free, personalized moving quote!